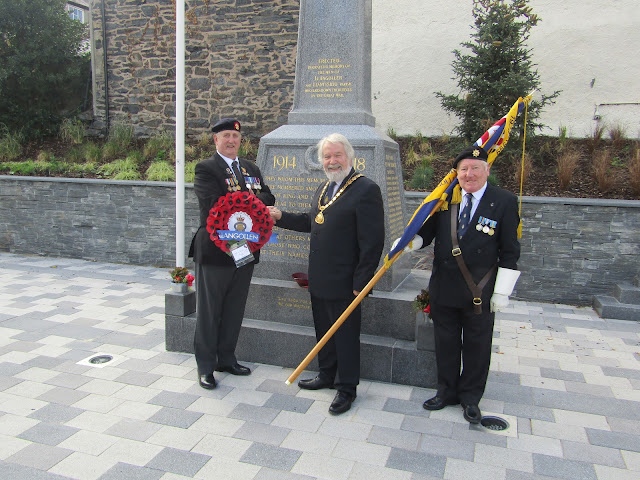 * Llangollen Town Mayor, Cllr Jon Haddy, gives an official send-off to Royal British Legion representatives Philip Stroud, the local branch chairman (left) and standard bearer Phil Silverston in Centenary Square.
Four members of the Llangollen branch of the Royal British Legion (RBL) will be joining their comrades from across Britain for a special ceremony in northern France next week honouring the fallen of the First World War.
A decade after the end of the war in 1918 the British Legion, as it was then known, organised an expedition for veterans and widows to visit the battlefields of the Somme and Ypres before marching to the Menin Gate in Ypres on August 8th 1928.


Exactly 90 years later, thousands of Legion representatives will recreate the 1928 Battlefields Pilgrimage and visit the same battlefields.
Then, next Wednesday, they will parade their branch standard and a wreath along the same route to the Menin Gate for the One Hundred Days ceremony to commemorate the last 100 days of the war and represent an entire generation that served while defending their country.


Proudly taking their place in the poignant pilgrimage will be Llangollen RBL chairman Philip Stroud along with branch standard bearer Phil Silverston, secretary David Thomas and parade commander Graham Patton.
They will be taking with them the official good wishes of the Town Council and people of Llangollen expressed to them at a gathering in the town’s new Centenary Square yesterday (Tuesday).


Housing the town’s two war memorials, the square was created by the Town Council to mark 100 years since the end of the Great War and was officially opened just a few weeks ago.


The RBL party were given an official send-off by the Town Mayor, Cllr Jon Haddy, who presented them with a poppy wreath he had signed on behalf of the whole community.
Philip Stroud, who himself served in the King’s Regiment, said: “The four Llangollen representatives will be journeying over to France this Sunday and will return the following Thursday after the two special events in which we are proud to be taking part.


“It’s good to know that we are taking with us the good wishes of the town.”
The Mayor said: “A lot of people from this area took part in the Great War. There was a big sacrifice and it’s important that people never forget this.


“I wished the RBL group bon voyage on behalf of everyone in Llangollen.”
* To learn more about the two special events in France they are attending, go to: https://www.britishlegion.org.uk/community/calendar/remembrance-services-and-events/great-pilgrimage-90/
Posted by llanblogger at 6:55 AM