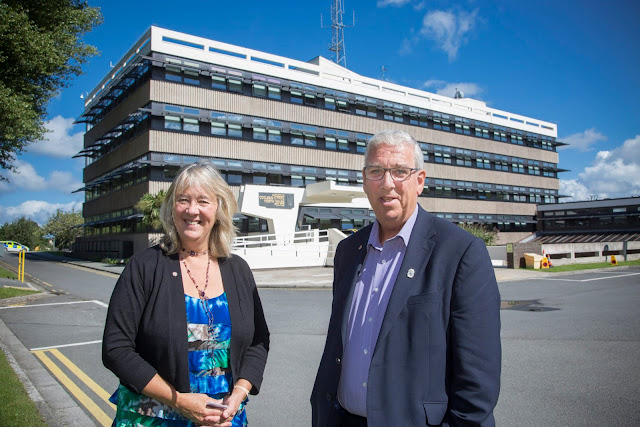 * North Wales Police and Crime Commissioner Arfon Jones with his deputy, Ann Griffith.
Crashing out of Europe with a hard Brexit or no deal at all will put North Wales people in jeopardy, the region’s police chief has warned.
According to North Wales Police and Crime Commissioner Arfon Jones and his deputy, Ann Griffith, we are ticking down to a potential crime-fighting catastrophe unless a “sensible agreement” can be reached.
If that doesn’t happen the UK could be frozen out of up to 32 of the shared services currently used to target criminals across Europe after March 31 next year.
Among them are ECRIS, the European Criminal Record Information Service used 539 million times by British police last year, Europol, the European Union law enforcement agency, and the European Arrest Warrant.
It would also lead to chaos and confusion at the port of Holyhead as well as the additional security concerns.
Mr Jones, a former police inspector, said: “All these important tools we currently use for security and policing are now at risk and could soon be denied to our police forces.
“Brexit may risk putting UK and North Wales in jeopardy. After all this cooperation is used to help North Wales Police guard against terrorism, serious organised crime including modern slavery and human and drugs trafficking.
“A hard Brexit will mean starting from scratch, negotiating individually with each country and using instruments that we currently use for countries outside the EU and that will mean extradition will be slower and more difficult, and criminals will evade justice and will find it easier to operate in the UK.

“Already the Crown Prosecution Service are planning for a worst case scenario. The Home Office have received £350 million in transition funding and the Border Force will receive £60 million of that.

“I recently challenged the Assistant Director of the UK Border Force who was unable to answer my questions around how policing and security looks like for the Common Travel Area but she did say that the CTA will remain.

“But that requires a single market and a Customs Union and Mrs May says we will be leaving both.

“I was shocked that a senior member of the Border Force couldn’t answer questions around what the policing of the Common Travel Area would look like after Brexit especially as they are recruiting 1,300 new Border force officers.

“To say that the Common Travel Area would remain after a hard Brexit shows amazing ignorance of what should be ‘bread and butter’ issues for the Border Force.

“However, it’s become increasingly clear that a hard Brexit will mean a hard border and that will not only be on the island of Ireland but also at Holyhead with the disruption to the flow of goods and services we have seen for 40 years and without the reassuring co-operation with European policing bodies.”

Life could also be made more difficult for other joint investigation teams from agencies like Eurojust which tackle a range of crimes from terror to child abuse and modern slavery.
The agreement was introduced 2002 in response to a growing threat from international terrorism and a recognition that extradition procedures were complex and time consuming.
Mr Jones and his deputy, Ann Griffith, voiced their concerns at a recent meeting between the Association of Police and Crime Commissioners and the main security agencies, the Police Chiefs Council, National Crime Agency, the Crown Prosecution Service and the Border Control Agency.
Ms Griffith added: “According to Lord Jay, Chair of the  Lords EU Home Affairs Sub-Committee, revealed they’d heard evidence that, by mid-May, the UK and EU negotiators had spent little more than an hour discussing the future internal security relationship, despite the obvious mutual interest in making rapid progress. As he put it, the current negotiations had not happened in the spirit of protecting the safety of millions of UK and EU citizens.
“If the negotiations run out of time without a deal there is a real risk of a crisis for policing across the UK and could leave North Wales increasingly vulnerable to serious crime.

“The Common Travel Area between Wales and the Republic of Ireland does not appear to have been given full consideration and nobody knows what the full implications will be.
“I am concerned that the fight against serious and violent crime will be frustrated if detailed arrangements are not put in place to meet current levels of UK-EU cooperation.
“Crime does not observe borders. Serious and organised crime, almost always has an international footprint.
“Therefore, it is essential for criminal justice agencies and policing to work in close partnership both across Europe and beyond in the post-Brexit era.
North Wales Police like other UK law enforcement agencies, makes wide ranging use of a number of Home Affairs and EU Justice measures to provide a dynamic, quick and efficient response to crime and criminality that effect our communities.
"The majority of crime doesn't happen on the streets anymore and our frontline is now online.
"Europol was established in 2009, and one of its main function is cyber-crime cooperation.
"If the cooperation with Europol an Eurojust is to continue, it will come at a price because it is likely we will have to pay a lot more to benefit from the work of these agencies.
"I am also particularly worried about the possible loss of the European Arrest Warrants which currently means that most wanted criminals can be returned promptly.
"Before the European Arrest Warrant, extradition arrangements could take up to 10 years whereas now we're talking about people being able to be transferred within a matter of weeks.
“It is a matter of great concern that insufficient attention is being given by the Government to the implications of Brexit and in particular the possibility of a No Deal Brexit on security and policing.
"Keeping people safe has got to be our priority," she added.
Posted by llanblogger at 7:00 AM