North Wales Assembly Member Mark Isherwood has praised all those involved in a rail project which will boost the local economy after revisiting it this week and seeing first-hand the tangible progress made since his last visit. 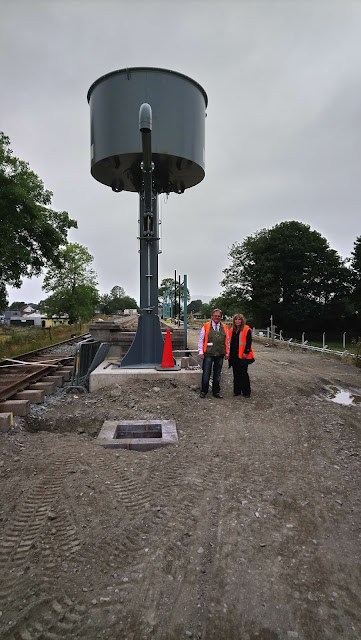 Mr Isherwood (pictured) visited Llangollen Railway’s major civil engineering project at Corwen Central Station to meet the Railway’s Chairman, Liz McGuiness, Project Leader, Richard Dixon-Gough, and active railway volunteers, and was extremely impressed by the work which has been carried out over the past eight months

He said: “So much has been achieved in the months since I last visited this magnificent project, with the water tower installed on prepared footings, the walls up for the former Weston Rhyn signal box, the temporary Station Building re-roofed and externally painted, and much more.

“The temporary station at Dwyrain Corwen East has brought in people despite its out of town location and Corwen Central Station, located near to Corwen town centre, should attract more with its car park and bus interchange. With the engagement of local businesses, the station could make a major contribution to the town’s regeneration as a visitor and business destination.

“There is also the potential for more use of the T3 Barmouth bus as a means of bringing in visitors and offering connections with Bala for the other nearby heritage railway.

“The temporary platform is due to be taken down in November, and it is hoped that the new terminus at Corwen can be open for Easter 2019."

Mr Isherwood added: “Speaking in the Assembly Chamber only last month,  I referred to the further contribution that heritage railways can make to our local and regional economies in Wales. I highlighted the final episode of Channel 4’s Great Rail Restorations series, operating its time train on Llangollen Railway, promoting the wonderful railway setting between Llangollen and Carrog, and now going to Corwen as well. I also noted that we still need a joined-up tourism offer with through ticketing, enabling regional visitors to extend their stays and have the fantastic time we know they can have.”

Liz McGuinness, Chairman of Llangollen Railway, said: " We are very excited about the prospects for the new station at Corwen opening in 2019. There is still a lot of work to do to complete the new station, but we are hopeful that, with continued support for the project, trains will terminate close to the town centre early in the new season on a date to be announced."
Posted by llanblogger at 6:47 AM