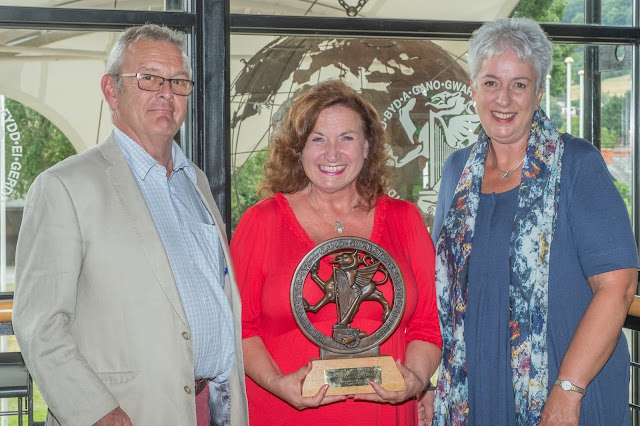 * Eisteddfod chairman Dr Rhys Davies and his wife Anne on either side of choir musical director Jo Williamson to whom they presented the trophy named in their son Owen's memory.
Picture by Barrie Potter.
A children’s choir which accidentally left Llangollen International Musial Eisteddfod without realising they had won a prestigious competition prize now has its trophy at last.
A misunderstanding meant Cantabile Hereford Cathedral School packed up and left the eisteddfod without realising they had been victorious in the hotly-contested Children’s Choir of the World contest.


And it was only when they were on their way home that they received a frantic phone call from festival organisers to say they had been voted joint winners of the coveted Owen Davies Trophy.
However, by then it was too late to do anything about it.


But now, weeks after the 2018 eisteddfod ended, their leader has been back to Llangollen to pick up the prize that was rightfully theirs.
The choir was founded exactly 10 years ago by former professional opera singer Jo Williamson who is its musical director.


She said: “On the Wednesday of the eisteddfod we’d won the Children’s Folk Song Choirs.
“We competed again the day after in the Children’s Choir of the World contest but we obviously misunderstood things and didn’t think we’d scored sufficiently highly to win it.


“We left in various vehicles to go home to Hereford but whilst my husband Phil and I were driving along the A5 I received a phone call to say we had actually been voted joint winners with the British Columbia Girls’ Choir from Canada. We both had the scores of 89.7.
“This was great news, especially as we are the first English choir to win this competition since it was set up. However, by the time we found out we couldn’t go back to Llangollen as we were all heading for home in different vehicles.”


The trophy they belatedly picked up was donated by the eisteddfod chairman Dr Rhys Davies and his wife Anne in memory of their son Owen who died at the age of just 33 in 2016.
“The fact that it’s known as the Owen Davies Trophy makes it particularly poignant for us, so it’s unfortunate that there was this misunderstanding,” said Dr Davies.


“As there were joint winners this year we’ve had an extra trophy made, which I was delighted to hand over to Jo Williamson. It’s great that they have their rightful prize even though it’s just a few weeks late.”
The choir includes 22 members, aged from 13-18, who are pupils at Hereford Cathedral School.


They have made regular Llangollen Eisteddfod appearances and previously won the Children’s Folk Choir Competition in 2015.
They went on to perform at the Royal Albert Hall in London as part of the BBC Songs of Praise event, The Big Sing.


Other glittering past performances included one before the Duke of Kent alongside Hereford Cathedral Junior School Chamber Choir.


In 2013 Cantabile won their class at the Cheltenham Festival of Performing Arts and the previous year ended with rapturous applause at the Three Choirs Festival in Hereford.
They have also frequently taken part in the BBC Songs of Praise Senior School Choir completion and hold the distinction of winning the event in 2015.
Posted by llanblogger at 6:53 AM