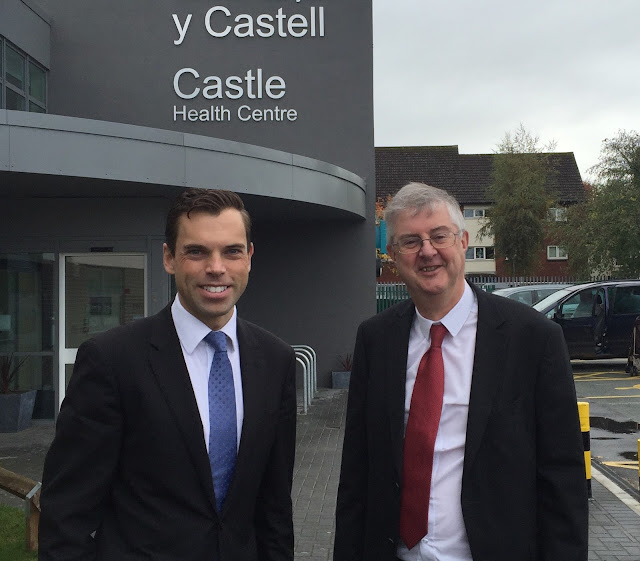 * Ken Skates AM, left with Mark Drakeford AM outside Chirk Health Centre.

The same concern about politics has been expressed to me repeatedly these past two years: that the world has gone crazy and nowhere appears stable.

With the proliferation of fake news, the rise of dangerously populist politicians and with divisive issues such as Brexit constantly looming over us, it's no wonder so many people feel insecure. That people feel dismayed and dejected, that the world feels unsafe and even unfamiliar.

That, allied to the way social media allows the most vocal – and often the most extreme views – to be heard over the less hysterical majority and you could easily believe we now occupy a space in which calm, considered reflection and conviction politics have been abandoned.

This makes it so important for us to elect leaders that can remain steady in a storm, who have inbuilt moral compasses rather than populist calculators, who have a proven track record of applying principles rather than a history of riding bandwagons.

In a world that Trump, Farage and Boris Johnson are turning angrily against itself, we need principled, internationalist and intelligent leaders to come to the fore and offer the shining light of hope. And we can start right here in Wales by electing Mark Drakeford as Welsh Labour leader and First Minister.

Mark also gets the North Wales issue. Whether real or perceived, there is a feeling across North Wales that the region has fared less well than other parts of the country in recent times, that the North feels detached from centres of power in Cardiff and London.

In my discussions with Mark, he is fully aware of the need to address regional inequalities and disengagement. And he is also acutely aware to the threat of ongoing austerity to the wellbeing and welfare of people in the communities I serve. Welfare reform, insecure employment and the financial pressures faced by families and councils will not go away until austerity ends. Which means we need a leader who is determined to protect the most vulnerable, someone who wants wealth and good health for all.

I'm backing Mark Drakeford because of his principles, his character and his priorities. And I'm hoping many more Labour members will join the campaign to elect Mark this autumn.