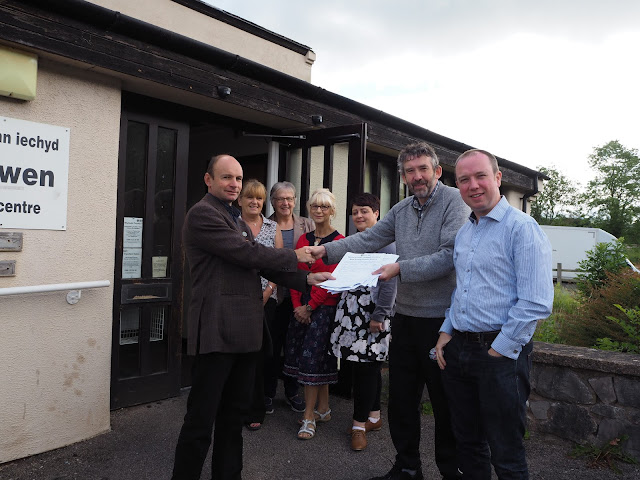 Residents in the Upper Dee Valley have demanded that the Health Board and Welsh Government continue to pay a rural support grant to their GP surgery in Corwen.

That was the clear message as campaigners handed over a 600-strong petition opposing plans to cut Corwen surgery's £52,000 Rural Support Payment.

Betsi Cadwaladr University Health Board is meeting tomorrow to discuss an appeal by the practice against the proposed cut. The petition was handed in by campaigners to the surgery in order for the surgery to present it to the board during tomorrow's meeting.

One of the petition's coordinators, Councillor Mabon ap Gwynfor, represents Llandrillo ward. He said: "The Rural Grant is there for a reason. It is accepted that running services in a rural area is more difficult and more costly and the people in this area have as much right to receive the best possible health care as those in other areas.

“The surgery staff are excellent professionals, who are all well liked by the community here. Losing this funding will mean that the surgery will somehow have to diversify to attract more funding, with the health care workers having to carry out extra work and not being able to do what they are there for - which is to ensure the well-being and the good health of the people in the Edeirnion valley."

Cllr Huw Jones, Corwen, said: "We appreciate that the health Board are struggling financially and they shouldn't be put in this situation themselves. We are extremely grateful to Corwen Surgery and its staff for the excellent work that they do looking after the well-being of the people of this area. It’s clear that their work means there’s less pressure on other health departments and the Social Services. The result of losing this core funding will result in more work for the other departments within the Health Service and Social Services, which will in the end prove more costly."
Posted by llanblogger at 2:09 PM