New Dot heads back to the 80s with its next film 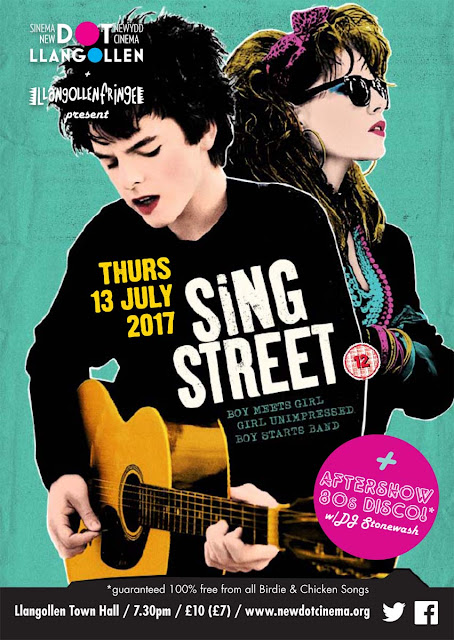 As part of this year's Llangollen Fringe Festival, New Dot Cinema is holding another of its special gala evenings - this time with a 1980s theme.

The main feature is ‘Sing Street’, a feel good coming-of-age film with a 12A certificate.

It’ll be seamlessly followed by an old school 1980s disco, with music cherry-picked by DJ Stonewash (see @NewDotCinema on facebook for more details.)

The film is set in Dublin during the eighties. It was one of last year’s best-loved indie films and has a soundtrack featuring hits from the period combined with newly written work.

The story is a classic boy meets girl and stars young actors from Ireland who were new to being on the big screen. Their freshness, talent (and voices) shine out, coached by director, John Carney.

Fifteen-year old Conor has just been moved from his fancy private school to a rough state school and he’s not fitting in.

One day he sees Raphina, a beautiful, aspiring model and to impress her, he invites her to be in his band’s video.

Unfortunately, he doesn’t have a band never mind a video. He quickly rounds up a motley collection of classmates. With a bit of eyeliner and a lot of hair gel, they turn themselves into a band, but the path of true love never runs smoothly.

It’s the start of Fringe Festival season, so dig out those shoulder pads from the back of the wardrobe and join New Dot under the glitter ball, going back to the eighties.

Tickets are available online, in Baileys Deli Llangollen and on the door, priced from £7 to £10. Fringe Festival Pass holders get in free.

Doors open at 7:30pm with the film starting at 8pm and ending at 9:45pm. The music stops at 12 midnight and entry just to the disco is available for £4 from 10pm.
Posted by llanblogger at 7:58 AM