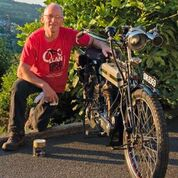 The 1916 Triumph believed to have carried the German Kaiser’s surrender document to allied HQ on November 11, 1918 is one of a special display of motorcycles over 100 years old that will be to the Llangollen Motorcycle Festival, August 5 and 6.

The 550cc Model H is one of several owned and ridden regularly by Brad Jones of Froncysllte (pictured).

Its history includes letters from an army officer revealing its vital role in the signing of the armistice.

It will be among an array of machines at least 100 years old (pictured below) in a display called The LlanBikeFest Centenary Club.

An even older 1913 Triumph 500 cc TT Replica, owned by Neil Shirley, will be part of an exhibit by the Vintage Motor Cycle Club, with machines representing each of the last 10 decades. And Jeff Owen of the Llangollen Motor Museum will be riding his own 1916 Triumph to the Festival. 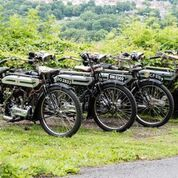 LlanBikeFest’s John Hutchinson said: “It’s tribute to the engineering skills of our motorcycling forefathers that many of these bikes are still on the road and going strong.”

Starring TT legend John McGuinness, LlanBikeFest is billed as a family-friendly Festival, with tons of trials and mountain bike action, children’s entertainment, music and a Battle of Britain Spitfire and Hurricane flypast on Sunday.

More information on www.llanbikefest.co.uk and  Facebook at Llangollen Motorcycle Festival.

LlanBikeFest is sponsored by Carole Nash Insurance, with day tickets £10 on the gate or online at www.llanbikefest.co.uk, and children 15 and under free. Or contact the Festival office at 07960 693398, office@llanbikefest.co.uk. Club stands and exhibitor bookings are free.