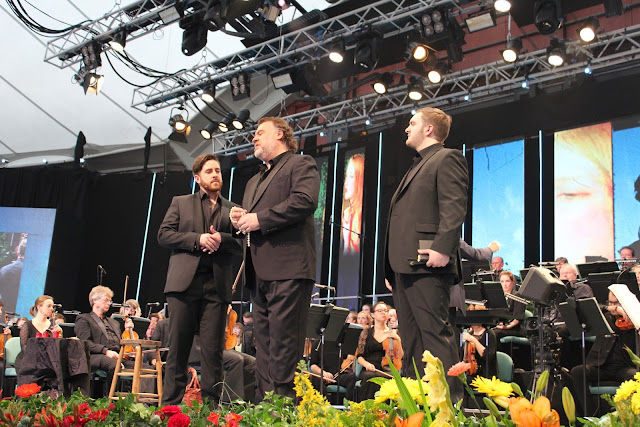 * Sir Bryn Terfel on stage for Puccini's Tosca at the Eisteddfod last night.

Crowds at the Llangollen Eisteddfod were brought to their feet to deliver a roaring standing ovation following a breathtaking performance of Puccini’s Tocsa last night.

The performance at the International Eisteddfod, sponsored by Pendine Park, featured three of the opera world’s most admired talents, accompanied by the acclaimed Welsh National Opera Orchestra, and saw a successful end to the second day of the 70th anniversary festival.

Much-loved Welsh bass-baritone Sir Bryn Terfel returned to the Llangollen International Musical Eisteddfod in the role of Baron Scarpia who was in pursuit of Lithuanian tenor, Benedikt’s Cavaradossi.

The world-class line up also featured rising young talent including locally-recruited Joseph Elwy Jones as the Shepherd Boy and North Wales baritone Steffan Lloyd Owen, who is only the second student from the Royal Northern College of Music to ever win the prestigious Kathleen Ferrier Award.

The cast was also joined by students from Ysgol Maes Garmon in Mold who performed in the chorus.


Pendine Park proprietor Mario Kreft MBE said: “It was a truly incredible performance by a stellar cast led magnificently by Sir Bryn Terfel, an opera superstar who is right at the top of his game.

"The performance of the soprano Kristine Opolais was sublime while the tenor Kristian Benedikt was also brilliant. I must also give a special mention to young Joseph Elwy Jones who was delightful in the role of the Shepherd Boy.

"It was the finest single concert I can recall at Llangollen Eisteddfod which I know was a sentiment shared by many others. It was a truly magical experience.

“We were delighted to support this concert because music and the arts are an important part of our enrichment programme and we genuinely believe that they improve the quality of life of our residents at our Wrexham and Caernarfon care homes through enriching lives across the generations.

“It was an unforgettable evening of world class opera right on our doorstep in North Wales."

“From the world class artists and bourgeoning local talent, to the subtle staging and stunning video work this wonderful opera was brought perfectly to life.

“The performance combined the excellence and expertise of its Welsh and international team, highlighting both the Llangollen Eisteddfod’s ability to attract global artists and showcasing the country’s intrinsic talent.”