Message of international harmony goes out at concert 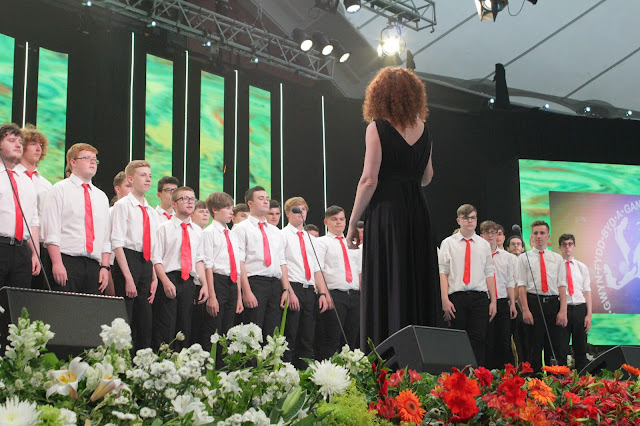 International competitors were given a warm and resounding Welsh welcome last night at the Llangollen Eisteddfod’s 70th anniversary International Celebration.

A colourful procession of representatives from some of the 29 countries at this year’s festival were welcomed by a moving performance of Welsh Hymn Calon Lân by Only Boys Aloud Gogledd as a poignant symbol of Wales welcoming the world.

The procession followed a performance of the annual Peace Message by Ysgol Y Gwernant and a recital of the newly composed Peace Anthem by Only Boys Aloud Gogledd.

Entitled Gobaith yn Ein Cân (Hope in Our Song), the piece was composed by Nia Wyn Jones, with words by Nia and songwriting partner Iwan Hughes, specifically for Only Boys Aloud Gogledd.

Reflecting the ethos behind the charity choir, the anthem began with a lone soloist and built up to a rousing finale, reflecting the message intended by its composer.

Nia Wyn Jones said: “The piece highlights how individuals can make things change for the better gradually. For example, if a person smiles, it can be passed on and on and before you know it, happiness is being spread. We all have that ability to do good.”

The opening segment of the concert, sponsored by Westminister Stone, was followed by the annual address from the President of the Llangollen Eisteddfod, Terry Waite CBE who highlighted the unifying spirit of the festival with a self-penned poem from his new book, Out of Silence.

The poem concluded with words that perfectly reflected the reasons behind the inception of the festival 70 years ago, to heal the wounds of World War II, which remain equally as relevant in today’s climate. Mr Waite read: “Be healed. Be at peace. Let the harmony of nations enter your soul. Sing with joy. Today, we are one.”

Following the emotional recital of the poem, the audience was then treated to performances from the Principality Only Boys Aloud Academi and the three finalists in the International Voice of the Future competition, before the first half of the show was rounded off with a vibrant dance performance from Lovely Professional University in India.

The second half of the evening saw the Llangollen Eisteddfod celebrate internationalism and the convergence of cultures even further, with performances from Indonesian dance group Al-Izhar Senior High School Pondok Labu.

A breathtaking rendition of famous Welsh song Suo Gân by the National Institute of Technology, Jinggaswara Student Choir, supported by Only Boys Aloud, stunned the audience as the evening drew to a close.

Music Director of the International Eisteddfod, Eilir Owen Griffiths, said: “The international celebration is always a highlight of Eisteddfod week and this year, for its 70th anniversary, was no exception.

“The performance was filled with so many beautiful moments, with different nationalities coming together on the pavilion stage. Cultures, languages, traditional dances and musical styles, all merging to create a truly world-class performance that celebrates the internationalism of the festival.”

* To purchase tickets for the Llangollen International Eisteddfod or for more information visit: www.Llangollen.net
Posted by llanblogger at 1:12 PM