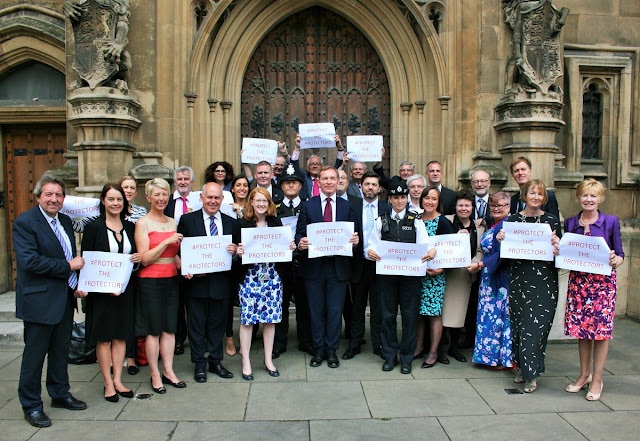 * Susan Elan Jones MP, fourth from right, outside Parliament
with emergency staff, Chris Bryant MP and other co-sponsors of the
Crime (Assaults on Emergency Staff) Bill.

Clwyd South MP Susan Elan Jones, who is co-sponsoring a ground-breaking parliamentary bill, is calling on local emergency workers to contact her if they have ever been attacked in the course of their duties.


She is a co-sponsor of Rhondda MP Chris Bryant's Assaults on Emergency Workers (Offences) Bill.

It aims to make attacks on emergency workers such as police, fire and ambulance crews an aggravated offence.

Ms Jones said: "Although it's already an offence to attack a police office in the course of their duties, there's widespread acknowledgement that few people get prosecuted and the sentences that are handed out are far too weak.

"Doctors, nurses and paramedics don't have additional legal protection at all which is dreadful when a survey last December showed hospital staff in Wales were physically attacked more than 18,000 times at work over the last five years.

"I invite any constituent who works in emergency services and who has ever been assaulted in the course of their duties to email me in confidence on susan.jones.mp@parliament.uk if they'd like me to speak in Parliament about what happened to them.

"No-one should be attacked when they're just doing their job - and the criminals who attack our emergency service personnel should have to face tougher sentences. I think it's high time our law did more to protect the people who work so hard in our emergency services."
Posted by llanblogger at 7:52 AM