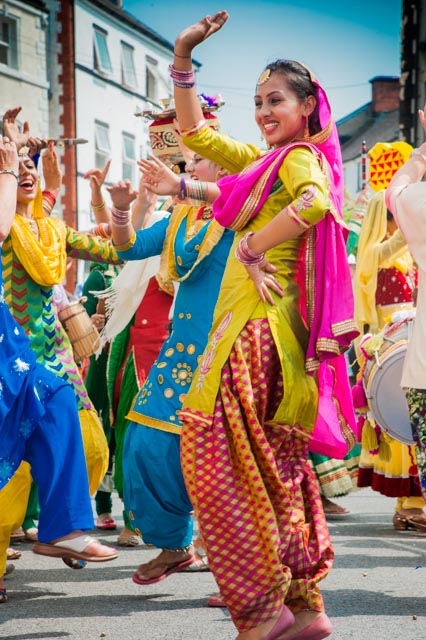 As the Llangollen International Musical Eisteddfod prepares to celebrate its 70th anniversary this week llanblogger takes a look at some of the highlights of the festival.

A male voice choir that performed at the first ever International Eisteddfod in 1947 is set to sing alongside two of Wales’ most prolific male voice choirs at the event’s landmark 70th Anniversary opening concert.

The Fron Male Voice Choir, like the Eisteddfod, celebrates its 70th anniversary this year. Formed in 1947, inspired by the inaugural International Eisteddfod, its history perfectly reflects that of the festival with many of its members coming together after returning from war. Remarkably, two of its original members still sing with the Fron today.

The nominees include Oswestry-based British Ironworks’Save a Life, Surrender Your Knife weapons amnesty project, the Welsh Refugee Council, for its work promoting tolerance and respect towards refugees, as well as empowering refugees and asylum seekers to build new lives in Wales; The Tim Parry Johnathan Ball Foundation for Peace and Médecins Sans Frontières for its policy of témoignage – speaking out to alleviate suffering and protect human life.

This year’s adjudicators will be TV presenter and British Red Cross ambassador, Konnie Huq, Richard Hazlehurst of the Bradford Peace Centre and humanitarian and President of the International Eisteddfod, Terry Waite.

The Eisteddfod formally opens on Tuesday with International Children’s Day hosted by CBBC presenter Storm Huntley, exclusively for schools. The 70th birthday event will include performances from Only Boys Aloud (Gogledd), Tubalate and the delivery of the poignant Peace Message, delivered by Ysgol y Gwernant, who have been practising hard for the event.

Tuesday evening will see a world-class performance of Puccini’s Tosca with global headliners Sir Bryn Terfel, Kristine Opolais and Kristian Benedikt sharing the stage for the very first time. The Tosca trio will be accompanied by the acclaimed Welsh National Opera Orchestra and will also be joined by locally- recruited Joseph Elwy Jones, 11, who was selected to play the role of Shepherd Boy after open auditions in April.

Sponsor of the Tuesday concert Pendine Park proprietor Mario Kreft MBE said: “It’s promising to be a truly unforgettable evening of world class opera, right on our doorstep starring our very own Sir Bryn Terfel – it’s going to be a very special night and one not to be missed.”

Wednesday marks the first day of the Eisteddfod’s competitions as well as the dynamic Cultural Showcase competition. The award winning Inclusion Project will also take place during the day.

Celebrating its ninth year, the Inclusion Project, which promotes unity, diversity and accessibility for all, will return to the festival’s main stage with a specially commissioned piece called Making Waves.

Performed by The KIM Choir from Holywell, SCOPE Flamenco Group from Chester, WISP Dance Club from Mold and Amigos y Gymuned from Wrexham, Making Waves focuses on the free flowing emotion of the sea and how it can connect people of diverse backgrounds from shore to shore and was written by poet Aled Lewis Evans with the input of members from all four groups.

The evening will see Grammy award-winning composer Christopher Tin join the Welsh National Opera Orchestra and Soprano Elin Manahan Thomas for an international choral and orchestral spectacular presented by Classic FM’s Andrew Collins. The Calling all Nations concert comes in two halves. The first features a broad spectrum of classical music depicting themes of renewal and togetherness. The second half will be a special performance of Christopher Tin’s Calling all Dawns, a songcycle featuring the iconic Baba Yetu – the theme tune to the globally renowned video game Civilisation IV.

Christopher will be joined by both international performers and the locally recruited Celebration Chorus for the evening concert. The 100 singers have learned eight songs in eight different languages to perform as part of Tin’s 12-piece songcycle – no mean feat in just 11 rehearsals!

Thursday will see the launch of the brand new International Acapella Group Competition and also the announcement of the Children’s Choir of the World Award.

Thursday evening will be the International Celebration, sponsored by Westminsterstone, featuring the International Procession of Nations. The Principality Only Boys Aloud Academi will be special guests, performing music ranging from the 17th Century to current music theatre, with conductor Tim Rhys Evans.

Ysgol y Gwernant will also return to deliver the Peace Message on the main Pavilion stage with Only Boys Aloud: Cor y Gogledd.

The concert will also showcase the talents of the finalists in the International Voice of the Future competition, which is supported by Pendine Park and the Bryn Terfel Foundation.

Friday will see the International Parade of Nations, led by Terry Waite CBE, pass through the town of Llangollen, while in the evening audiences will be treated to An Evening with Gregory Porter, when the acclaimed Grammy-award winning singer, songwriter and actor takes to the pavilion stage.

For his North Wales debut he will be joined by his talented band of musicians and will perform tracks from his newest album Take Me To The Alley as well as older works. With expressive self penned songs full of metaphor and meaning and clever jazzy arrangements, the evening is expected to be a magical night of soulful soothing sounds.

Saturday will see the choral competitions heat up as choirs from across the globe compete on the famous Eisteddfod stage. The world’s best mixed, female, male and open category choirs will fight it out to be crowned 2017’s Choir of the World.

Saturday’s evening concert, which is sponsored by GHP Legal, will feature a special performance of soul and doo-wop 50’s and 60’s hits from The Overtones, Britain’s number one vocal harmony group, before the winners of the adult choir categories compete for the title of Choir of the World 2017 and the prestigious Pavarotti Trophy.

During the evening the winners of the Dance Champions of the World will be awarded the Lucille Armstrong Award.

Mr Richard Lloyd, Senior Partner at GHP Legal, said: “The Llangollen Eisteddfod’s Choir of the World competition is truly iconic and for many of its visitors and international performers it is the highlight of the week.

“Combined with a performance from the Overtones this is set to be an exciting climax to the week’s competitions.   We are proud of GHP Legal’s long association with the Eisteddfod and it is an honour to once again be sponsoring this evening
concert during the festival 70th anniversary celebrations.   We cannot wait to see who is crowned Choir of the World 2017.”
Sunday 9th July

Sunday will be the Llangollen Eisteddfod’s closing party, headlined by one of the biggest rock bands of our generation - Manic Street Preachers.

Supported by along indie rock band Reverend and The Makers, and BBC Radio 1 DJ Huw Stephens. They’ll roll out a collection of their most legendary anthems in one of the biggest gigs of the year in North Wales.

The day will start at 2pm when the Eisteddfod’s vibrant outside stages host a feast of contemporary music from a diverse range of rock, pop and indie bands, and talented vocalists, including The Roving Crows, Buddy Holly & The Black Jacks and Army of Skanks.

BBC Radio One DJ, Huw Stephens, said: “I'm very much looking forward to being at Llanfest on Sunday night. I've enjoyed the festival on S4C before now but never been, and I think the Sunday with up and coming artists is a great idea. New artists need a platform to play their music to audiences, and to do that at a renowned festival is a great thing.

“I'm also looking forward to seeing Reverend and the Makers, real stalwarts of the live circuit, and the legendary Manic Street Preachers in the evening. They are such a brilliant live band, poetic, masterful and utterly captivating on stage. It's going to be a great night!”

Eilir Owen Griffiths, music director of the Llangollen International Musical Eisteddfod, said: "After months of preparation the week of our 70th anniversary concert is finally here. International competitors are flying in from all corners of the globe and we are preparing to welcome some of the world's biggest stars to the Royal International Pavilion Stage - it's an exciting time to be in Llangollen!

"The Llangollen Eisteddfod has always been about bringing people from diverse cultures and backgrounds, with different musical interests and completely different lifestyles together in the spirit of friendship and peace. With over 2,000 competitors expected from 29 countries and acts spanning the genres of Jazz, Soul, Opera, Classical, Rock, Acoustic, Orchestral and much, much more, we feel we have certainly achieved this.

"On a personal note, with this being my final Eisteddfod, I am looking forward to watching this 70th anniversary International Eisteddfod unfold and absorbing every act I see. From the fantastic acts performing in the Inclusion Project on Wednesday and music from our special guests The Principality Only Boys Aloud Academi on Thursday, to Gregory Porter on Friday, The Overtones on Saturday and Llanfest 2017 headlined by the Manics on Sunday, it's going to be a real spectacle.

"We're looking forward to welcoming all of our acts, competitors and visitors for what promises to be an exciting and uplifting week."

Dr Rhys Davies, Chairman of the International Eisteddfod, said: "I am incredibly proud of the whole team, from the in house staff to our army of dedicated volunteers who support the Llangollen Eisteddfod each year, for putting together such an incredible 70th Anniversary festival. Without them none of this would be possible.

"When I became Chairman I promised a festival that reaches across the border to appeal to a wider national and international audience and this year's evening concerts certainly have achieved that. With stars like Gregory Porter, Kristine Opolais, The Overtones, Christopher Tin, Manic Street Preachers and Reverend & The Makers joining us, we have cemented ourselves as a truly international festival.

"As our 70th anniversary festival begins it's also important to highlight the relevance of the message at the heart of the Llangollen Eisteddfod - bringing people together to sing and dance in peace and international friendship. It has been a difficult year internationally, with a number of terrible incidents such as the Manchester Arena attack and the terrorist incident in Stockholm. Never before - perhaps since the Llangollen Eisteddfod's inception after WWII - has our message of peace and unity been more relevant or important.

"This year's International Eisteddfod is set to be a vibrant, energetic and exciting event from the moment the doors open on Monday for our 70th Anniversary Opening Concert. I hope that all of our guests and performers, local, national or international, enjoy the week, make new friends and experience wonderful music and dance - presented in the way that only Llangollen can!”

* For more information or to purchase tickets for the 70th anniversary Llangollen International Musical Eisteddfod, including the first ever performance of Making Waves, please visit: www.Llangollen.net
Posted by llanblogger at 6:40 AM