Flying Millyard will thunder into LlanBikeFest 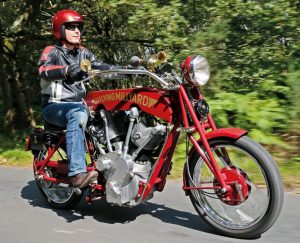 * Its creator aboard the Flying Millyard which is heading for LlanBikeFest.

One of the most outrageous motorcycles ever built will thunder 190 miles from its creator’s home in Berkshire to the Llangollen Motorcycle Festival on August 5 and 6.

Motorcycle journalist Roland Brown described it in a road test it as “mad but wonderful - like a two-wheeled Chitty Chitty Bang Bang”. 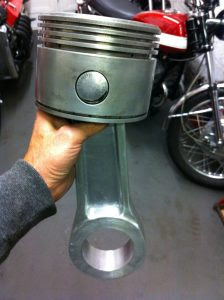 Revving at an earth-shaking maximum of 1800rpm and generating around 80bhp, Allen is also planning to ride it up the Horseshoe Pass to the Ponderosa Café during the festival.

“My bikes are built to be used,” he said. “I’ve ridden the Flying Millyard 4,500 miles to shows and events across the UK, including the Isle of Man, Isle of Wight and Guernsey. I am really looking forward to riding around LlanBikeFest and hope others will enjoy it.”

* Follow LlanBikeFest on Facebook at Llangollen Motorcycle Festival and Twitter at @llanbikefest.
LlanBikeFest is sponsored by Carole Nash Insurance, with day tickets £10 on the gate or online at www.llanbikefest.co.uk, and children 15 and under free. Or contact the Festival office at 07960 693398, office@llanbikefest.co.uk. Club stands and exhibitor bookings are free.