Campaigner and columnist heads for the Fringe 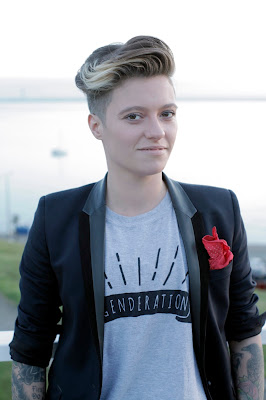 And next month Jack appears at Llangollen Fringe Festival.

Since 2013 Jack (pictured) has been a resident columnist at The Guardian, has published two best-selling cook books, was the face of Sainsbury’s, campaigned for poverty and hunger charities, fought for equal rights, begun a parliamentary campaign, and appeared on Question Time.

As a single mum who identifies as non-binary transgender, Jack has become something of an idol for both  the LGBTQ, and the feminist movements alike.

Jack is also an advocate for left wing politics and begun her own campaign trail in 2017, having to step down due to health issues, and receiving death threats in the post.

Jack will be in conversation with award winning poet Sophie McKeand, on Tuesday July 18 at Llangollen Town Hall as part of Llangollen Fringe.

Sophie is currently the Youth Poet Laureate for Wales, and has interviewed many prolific public figures such as Viv Albertine, Victoria Coren-Mitchell, Jon Ronson, and Sir Andrew Motion.

* TICKETS ARE ON SALE NOW AT www.llangollenfringe.co.uk