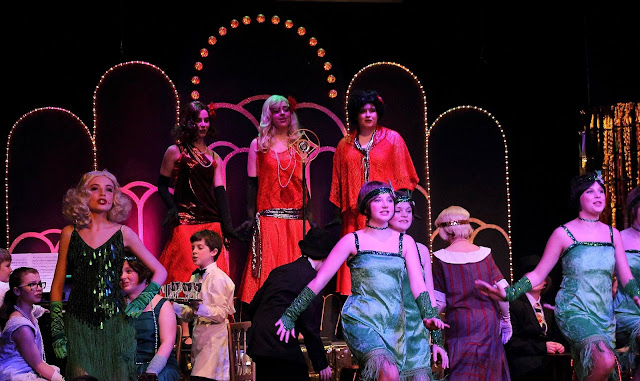 * A colourful scene from Llangollen Young 'Uns in Bugsy Malone.
As one of the top songs in the show says, “Everybody loves Bugsy”.
But it wasn’t just our hero who was adored by the packed audience at last night’s final Town Hall performance of the musical Bugsy Malone but the whole impressive cast.


The latest production by the Young ‘Uns, junior section of Lllangollen Operatic, demonstrated once more what a talented bunch of youngsters this outfit attracts.
They can sing, they can dance, they can act, they can do comedy. In fact, the whole works!


And that goes for everyone from the leading characters to the chorus, which at times looks as in it’s in its hundreds as it fills the stage with spectacle and sheer exuberance.
Bugsy, which the Young ‘Uns performed from Thursday to Saturday with a matinee yesterday, is one of the most famous all-kid shows around.


It’s set in roaring twenties New York and is packed with gangster rivalry, molls, rackets, speakeasies and general Prohibition Era naughtiness.
Except it has a nice touch in that the rival mobsters blast each other with custard pies and guns shooting a stream of goo rather than bullets, so they emerge after getting blasted covered in foam rather than full of holes.


It’s all about Fat Sam’s gang of hapless heavies taking on their equally useless opposite numbers from Dandy Dan’s operation.
Caught up in the middle of the chaos are nice guy Bugsy and the girl he falls in love with, singer and wannabe Hollywood star, Blousey Brown.


Taking the part of Bugsy is Cassius Hackforth, a Young ‘Uns veteran who shines in any role he takes on, and this was no exception as he gave another high octane performance. Celyn Orton-Jones made the perfect Blousey, offering a neat line in singing and acting.
Fat Sam was portrayed to perfection by Aled Morris and Shea Ferron made an excellent Dandy Dan. Tallulah, Sam’s goylfriend and his club’s headlining singer, was played with a high degree of confidence by Maia Molloy.


The show had some memorable settings, both in terms of the brilliantly painted backdrops and video excerpts featuring period shots of rolling newspaper presses and a gangster car chase, plus some modern footage showing Bugsy and Blousey in a flashback sequence driving away from outside the Town Hall in the rumble seat of a fantastic 1926 open tourer loaned by Llangollen Motor Museum.
Costumes were also marvellous and a credit to the huge and dedicated behind-the-scenes team.


This was another triumph for director Chrissie Ashworth and producer Pamela Williams so it has to be fedora hats off to them and of all those multi-talented kids.
Posted by llanblogger at 10:17 AM