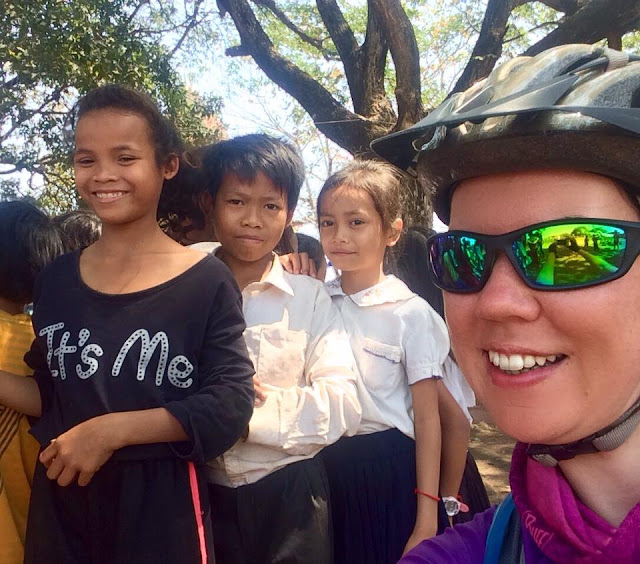 * Louisa meets some local children on her ride.

Back in 2012 Louisa Jones, 38, took part in a gruelling 260-mile cycling expedition through India in aid of three women’s cancer causes, raising over £3,000 along the way.

This time she’s joined a group of 70 women to cycle 450km (280 miles) from Ho Chi Minh City in Vietnam to Angkor Wat in Cambodia by February 17.

Louisa, who has already raised around £2,000 in sponsorship for the trip, is  sending regular progress reports on the expedition to llanblogger.

Here is her latest update ...


On Saturday we had a much needed day off cycling and instead made a five-hour journey by ferry up the Mekong river from Chau Doc, crossing the border into Cambodia.

We got a fascinating insight into river life along the way, passing countless riverside dwellings, fishing boats and heavily laden cargo ships carrying a huge variety of fresh produce and natural resources.

Our destination port was Phnom Penh and after disembarking, we paid a visit to the National museum, where we received an interesting overview of Cambodian beliefs and life through the ages. The evening was spent exploring the city by tuk tuk, a favourite mode of transport here.

On Sunday the cycling recommenced with a 34-mile route through some stunning countryside and rural communities where people live humbly but seemingly happily in wooden houses on stilts, which they share with their animals.

We stopped at a number of working  monasteries for water breaks and lunch, where we found some very ornate temples and spoke to Buddhist monks and trainees, gaining a glimpse into their frugal way of life, a complete contrast to the opulence of the buildings in which they worked and worshipped.

There was so much to see and so many wonderful photo opportunities along the way that it's a wonder we got to the hotel in Kampong Cham before nightfall but we did and spent the remainder of the evening exploring the temple and bustling town.

Today (Monday) was our biggest test and we set out at 6am to take on a gruelling route along highways that fell just short of 70 miles.

To put this in perspective, it was the equivalent of cycling from Chirk to Birmingham but in 35 degree heat with strong head and cross winds at times.

It took a huge physical and mental effort for a lot of us, especially in the heat of the afternoon and with aches and pains kicking in. However we did it and arrived in Kompong Thom just before 5pm.

Tomorrow is the final day of our amazing journey and will no doubt be an emotional one for all.

Posted by llanblogger at 3:49 PM