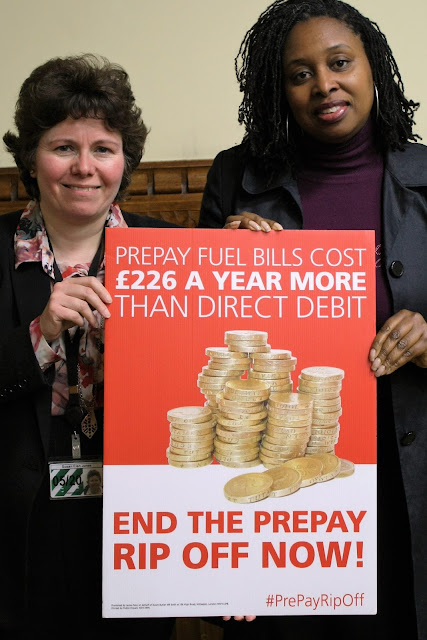 * Susan Elan Jones MP (left)campaigning last year with Labour MP Dawn Butler for fairer tariffs for prepayment meter consumers.
Local MP Susan Elan Jones has welcomed the fact that four million prepayment meter customers should see a saving of around £80 a year.
Over the last year, the Clwyd South Labour MP has been involved in a national campaign calling for tougher action to reduce costs of purchasing gas or electricity from coin or token-operated prepayment energy meters.

The bill reduction change will happen thanks to a price cap announced by energy regulator Ofgem. Ofgem’s temporary price cap, which comes into effect in April, was one of the measures recommended by the Competition and Market Authority after its two-year investigation of the energy market. The levels of the cap will be updated every six months and is expected to stay 2020.


“At the last general election, the Labour Party called for tough measures to tackle energy bill tariffs and keep prices down. The Labour Party may not have been popular enough to win an election, but the policy itself was popular and it’s vital we continue campaigning for it.


"Also, whatever our personal views on Brexit, we need to consider what a weaker pound means in terms of likely energy cost rises. The Government needs to do more to help families facing rising gas and electricity bills.”
Posted by llanblogger at 6:42 AM