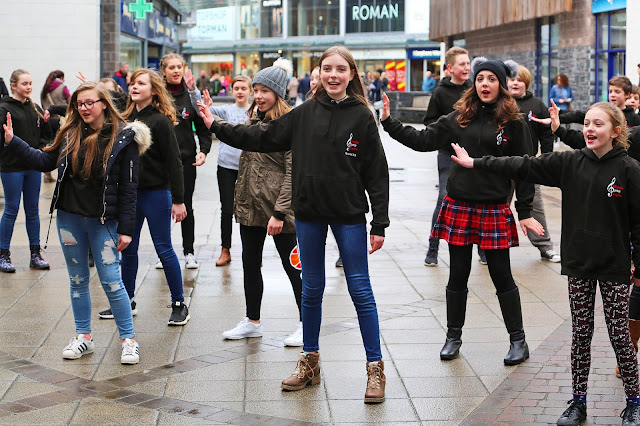 A shopping centre has been invaded by New York gangsters, Chicago hoods and mob molls - but there was nothing to worry about.

They were members of the cast of Llangollen Operatic Society’s Young 'Uns who surprised and delighted shoppers at the Eagles Meadow shopping centre with a flashmob performance of songs from their brand new Bugsy Malone show which opens tomorrow (Thursday) night at Llan Town Hall.

The show’s director, Chrissie Ashworth, says the show, which runs until Saturday, is great family entertainment.

Chrissie, from Corwen, who has been with the Operatic Society for more than 30 years and has been director of the Young 'Uns for the past three, said: “It really is a fantastic show which involves a cast of 38 members.

“The young performers are wonderful to work with and are such an amazing group. They are aged from six to 18 and put their heart and souls into each show. Bugsy Malone is a real family show and guaranteed fun for people of all ages.”

“We are delighted the management of Eagles Meadow Shopping Centre allowed us to put on a public performance so shoppers can get a taste of the show.

“It’s been an amazing experience for our young people and they have thoroughly enjoyed it. It’s been another chance to perform before a public audience and gain more invaluable experience.”

The show’s producer, Pamela Williams, of Llangollen, who has been working with the Young Uns for the past three years after a ‘lifetime’ with the society’s adult group, added: “It’s amazing to see how keen and enthusiastic the young performers are. They just want to get up on stage and perform.

“It’s been fantastic bringing a snapshot of our Bugsy Malone show to Eagles Meadow shopping centre. The management have been so kind and even supplied us with a PA system. We couldn’t have asked for more.”

Shea Ferron, 14, a pupil at St Joseph's School, in Wrexham, plays Dandy Dan in the show and says he really enjoys being a member of Llangollen Operatic Society’s Young 'Uns.

He said: “I love it. This is my third show. I’ve played Boggins in Half a Sixpence and the Ugly Duckling in Honk. We meet twice a week and I enjoy everything about it.

“I love musical theatre and, naturally, my ambition is to eventually make it onto the West End stage. Bugsy Malone is such a great show. It’s a lot of fun, has a great storyline and it’s very fast moving.”

Celyn Orton-Jones, 13, pupil Ysgol Dinas Bran in Llangollen, joined the Llangollen Operatic Society’s Young Uns aged six and Bugsy Malone, in which she plays Blousey, will be her seventh show.

She said: “This is my first main role. I have had minor speaking parts in shows like Annie, Honk, Beauty and the Beast and Half a Sixpence but this is a step up.

“I really enjoy the fact the show just involves young people. I’d love to eventually get onto the West End stage but I suppose I’m not the only one!"

She added: “It’s great fun performing at Eagles Meadow. People out shopping don’t expect to be entertained and it’s fun seeing the surprise on their faces.”

Aled Morris, 13, of Dolywern, who is also a Ysgol Dinas Bran pupil, plays the role of Fat Sam and says Bugsy Malone is the first show he has been involved with.

He said: “I only joined in September last year. I like drama and wanted to do something more than school plays. Being a member of the Young Uns has been brilliant and I really enjoy it.

“Of course I’d love to be an actor or performer eventually. It’s been great coming down to Eagles Meadow and performing a few of the songs from the show. It’s been a good experience.”

Maia Molloy, 13, of Llangollen who also attends Ysgol Dinas Bran, plays the role of Tallulah in the show and says she really enjoys being a member of the Young 'Uns.

She said: “I was in the chorus for the Beauty and the Beast and Honk but this is my first lead role. I love being with friends and working on the show. I also really enjoy performing and the costumes are great.

“I don’t think I want to be a professional actor or performer. I prefer writing and my ambition is to become a writer or journalist. However, playing roles and shows like Bugsy Malone is a great hobby!”

“We pride ourselves on the fact Eagles Meadow is at the heart of the communities we serve and we want to support and help groups such as Llangollen Operatic Society if we possibly can.”

He added: “It’s wonderful to see young people working together to put on a really professional show and I’m really pleased they had such a good time performing for our shoppers and visitors here at Eagles Meadow.”

* Bugsy Malone will be performed at Llangollen Town Hall at 7:30pm from Thursday, February 16, to Saturday, February 18, with a Saturday matinee performance at 2:30pm. Tickets are £10 with concessions £8. To book or for more ticket information please visit www.ticketsource.co.uk/llangollenoperaticsociety
Posted by llanblogger at 9:09 AM