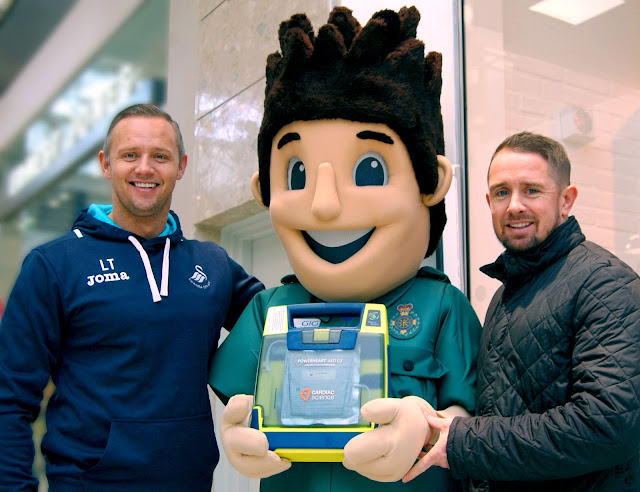 It is aimed at raising awareness of what a defibrillator is, where to find the nearest in a life-threatening emergency and how to raise funds to purchase one for your community.

In Wales there are approximately 8,000 sudden cardiac arrests outside hospital each year and every minute without CPR and defibrillation reduces the chance of survival by 10 per cent.

As part of the campaign the Trust is encouraging members of the public to take a selfie with a defibrillator or a photo of one and send it via Twitter with details of its location and postcode to @WelshAmbPIH using the hashtag #Defibuary.

Williams, who notched up 58 tries in 87 games for Wales, and Trundle who netted 83 goals over two spells with the Swans, became the first to take part at the launch of the campaign at Swansea’s Quadrant Shopping Centre and are encouraging others to join them.

Williams, who played as a winger for the both the Ospreys and Neath and now works as a TV pundit, said that knowing where to find a defibrillator could make all the difference to someone suffering from a cardiac arrest.

He said: “It is a pleasure to be supporting the Welsh Ambulance Service with their Defibuary campaign.

“I never fully understood how important it is knowing where your nearest defibrillator is. It literally saves lives.”

Meanwhile Trundle, who burst onto the scene with Rhyl and Wrexham AFC and is still scoring for fun for Llanelli Town, called on as many people as possible to get tweeting their defibrillator selfies.

The Swansea City ambassador said: “It's great to be involved in the Welsh Ambulance Service’s Defibuary campaign.

“You could save a life by knowing where your nearest defibrillator is. There's prizes up for grabs too so get tweeting your selfies with defibrillators in Wales.”

Those who take part will have the chance to win a number of fantastic prizes including two defibrillators for your school or community, donated by the Welsh Ambulance Service and the Cariad charity.

For sports fans you can also get your hands on five complimentary tour tickets for the Principality Stadium in Cardiff, courtesy of Wales Rugby Union, and two FIFA World Cup qualifier tickets for Wales versus Austria on September 2nd 2017, donated by the Football Association of Wales.

Other prizes up for grabs include family entry to Bluestone Water Park, a meal for two at Wetherspoons, a selfie stick, Costa Coffee syrups and a gift from Thorntons.

Dr Brendan Lloyd, Medical Director for the Welsh Ambulance Service, said: “When someone goes into cardiac arrest, early defibrillation is a crucial part of the chain of survival.

“In fact there are a number of people in Wales who are alive today thanks to the quick-thinking actions of bystanders in using a nearby defibrillator.

“That’s why we’re encouraging everyone to familiarise themselves with where they can find the closest piece of lifesaving equipment available to them. Hopefully you will never need to use it, but it really could make all the difference.”

To locate your nearest defibrillator you can use NHS Direct Wales’ local service finder online at http://www.nhsdirect.wales.nhs.uk/localservices/

You can also watch the Trust’s guide to using a defibrillator on YouTube at https://www.youtube.com/watch?v=_lDjBHIL6mU