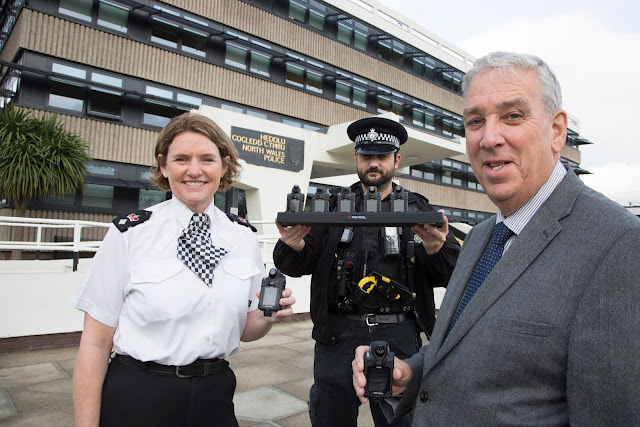 North Wales Police have taken just delivery of 301 extra body worn video kits and 50 docking stations and they're being rolled out across the region.

They have been paid for by North Wales Police and Crime Commissioner Arfon Jones, a former police inspector, who has invested £163,000 in the technology.

Mr Jones is fulfilling a promise he made in his manifesto before he was elected with a large majority last May.

Body worn video, which captures evidence of crimes as they happen, was first
introduced in North Wales in 2015, with 120 kits being deployed across
the region which meant a third of response officers had access to the cameras.

The arrival of the additional devices means the force will be the first in Wales to give the crime-fighting technology to all its police officers and police community support officers while on front line duty, including members of the specialist firearms and rural crime teams.

One area where the high-tech equipment has already proved particularly useful is in the aftermath of an incident of domestic violence where evidence of any
injuries and damage can be gathered along with the behaviour and demeanour
of the aggressor and the victim.

Mr Jones said: "I promised in my manifesto that I would supply all front line officers with body worn video and today’s the day. I’m very, very happy that we’ve found the money to be able to do this.

"It’s going to help victims of crime, help us arrest more offenders and improve the quality of life of vulnerable people.

"It's been shown that the introduction of body worn video equipment improves the success rate in domestic violence cases by 12 per cent. That's massive.

"I look forward to seeing more and more offenders appearing in court and less survivors having to put up with a poor quality of life.

"I would expect there to be more guilty pleas and that’s a good thing.  It avoids survivors of domestic violence having to give evidence in court.  It saves money and it’s obviously better for the perpetrator because the earlier they plead guilty, the more reasonable the sentence will be for them.

"Body worn video is making North Wales a safer place. It's good for everybody except for the criminals."

"The results for body-worn video nationally speak for themselves.

"When police officers are using body-worn video they are showing what’s happening in reality - the evidence is incontrovertible.

"They're being used when officers go to road traffic accidents and they’re using them when they serve warrants.

"There is a sound evidence-base for us having body-worn video, and it’s supporting my officers on the front line who do a very difficult job well and they are very professional in what they do, so anything to support them gets my support.

"We’re still analysing the data but we are finding that complaints against officers have gone down, people making vexatious complaints have reduced."

He said; "It’s made a big difference. When we attend various scenes, for example a road accident, our priorities would be casualties and things like that. We can use our body-worn video on whilst we’re dealing with casualties.

"The equipment also makes people less likely to want to be abusive, threatening or violent because they know they’re being recorded on camera, It nips problems in the bud."

The introduction of the equipment has been masterminded by the force's Chief Information Officer, Ian Davies.

He said: “It can make a massive difference in all areas of policing including domestic related crime and success rates for convictions are going from 70 per cent to 82 per cent. It's fantastic news for the victims and that's the important thing."

The new technology also has the enthusiastic backing of the North Wales branch of the Police Federation.

Secretary Richard Eccles said: "The introduction of extra cameras by the PCC and the notable reduction in public complaints are very much welcomed.

Officers are increasingly keen to utilise the cameras to deter assaults and abuse from those who blight our communities in North Wales.

"Hopefully, as we put more evidence before the courts showing exactly how officers are treated by a criminal minority we will see increased sanctions and increased public confidence."
Posted by llanblogger at 6:35 AM