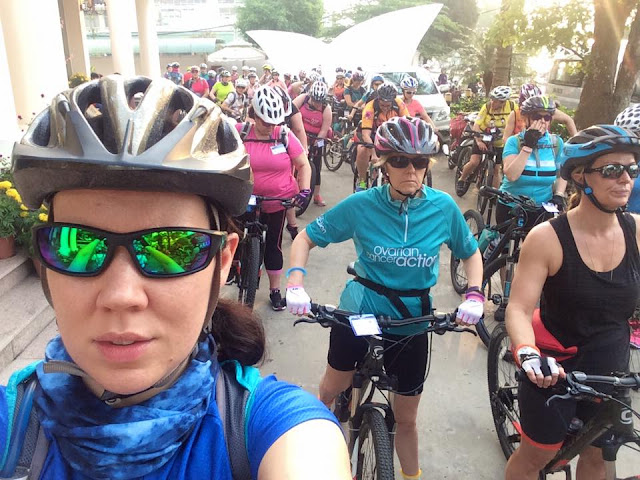 * Louisa Jones, left, sets off on her charity cycling marathon.

“We arrived at Ben Tre, the starting point for our challenge, mid-afternoon on Tuesday after around 24 hours in transit.
“Our group of 102 ladies from all over the UK, plus a number from Italy, Spain and even as far afield as Mexico, had convened at  Heathrow early Monday morning to fly first to Singapore and then on to Ho Chi Minh City, before transferring to Ben Tre by coach.

“The city of Ben Tre, located on Vietnam's Mekong Delta, is the main town in the province of the same name. On arrival we were fitted for our bikes and then had free time to explore the colourful market nearby to our hotel.


“I've been to some interesting markets on my travels around the world but this really was something very special with a huge and exotic array of wares for sales.

“After a refreshing and much needed night’s sleep, we embarked on our first day of cycling. To acclimatise and allow us to get used to our bikes, we cycled only a modest 31 miles from Ben Tre to Tra Vinh, crossing the Mekong and a tributary by ferry on the way.


“Due to the heat and high humidity, we have to start off very early each day to take advantage of the slightly cooler morning temperature. We therefore set off at around 7.30 this morning, cycling first through the outskirts of the city and then on into a swampy, jungle like area where you can find water coconut groves among the fairly dense vegetation.

“We then cycled on into rural communities, where people live in modest, rustic dwellings and set up shops by the roadside selling everything from fruit, vegetables and coconuts to live chickens and local delicacies.
“Given Vietnam's turbulent history, these communities strike you as extremely peaceful, which could be attributable to the strong Buddhist culture, and although a large group of lycra clad cyclists is clearly a source of much curiosity, there was never any feeling of hostility or intimidation and locals waved and shouted as we passed by.

“The roads were much better than I expected so far. The main method of transport used here is the scooter (tax on cars is 200%) and people use them quite literally to carry everything!


“Driving through Ho Chi Minh alone we witnessed someone with a family of four on his bike and later, a washing machine and even a tree!
“What struck me through was how little road rage or aggression there was, with scooter drivers doing their utmost to avoid you and warn you of their presence with a friendly toot - thoroughly refreshing!

“Tomorrow is a more challenging day with a route of 67 miles taking us from Tra Vinh to Can Tho alongside paddy fields and stunning scenery. It will tough no doubt but hopefully also very rewarding.”


* To sponsor Louisa, go to her fundraising page at:  https://www.justgiving.com/fundraising/Louisa-Jones9
Posted by llanblogger at 6:33 AM