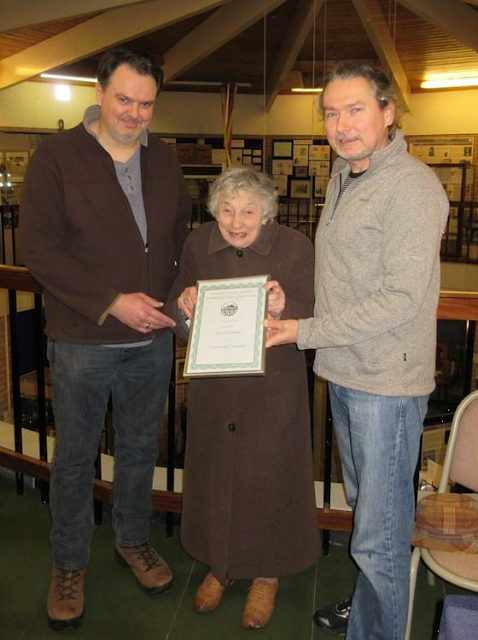 * Betty Lowe presents the Civic Award to Rhodri
and Penri Thomas, sons of Gill and Glyn.

At the January AGM of Llangollen Civic Society there were five nominations for the Civic Award for 2016.

But there was unanimous vote that the award should be made posthumously to Gill and Glyn Thomas, who had both died in the past few months, and had both made a valued contribution to the town over many years.

The presentation was made by Betty Lowe, the society’s life president, during the meeting which was held at Llangollen Museum.

Gill and Glyn had been secretary and treasurer of Hanes for some years, and after their loss the committee had recommended that the society be dissolved.

At the AGM the members overwhelming agreed to this course of action.

Members of the society will be welcomed as Friends of the Museum, which holds talks on the last Wednesday of each month.

It has been suggested that the Friends expand their activities to include visits to places of interest, as Hanes used to do.

The Museum plans to develop a historical herb garden in memory of Gill, since this was a passion of hers.

It will be based on a monastic herb garden such as at Valle Crucis, with sections for herbs with different applications.

This would form the basis for demonstrations of the historical use of herbs.
Posted by llanblogger at 6:34 AM