Time to act on climate change, say Friends of the Earth 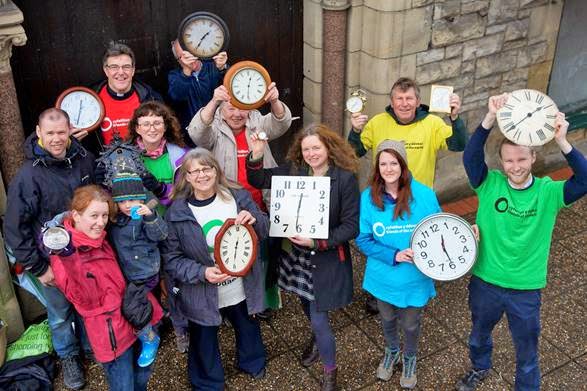 * Members of Llangollen Friends of the Earth at their gathering.
Members of Llangollen Friends of the Earth (FoE) gathered together to let the Government know it’s "Time to Act on climate change".
This local event tied in with a national march in London which saw over 20,000 people converge.
The aim was to ensure climate change is high on the agenda ahead of the General Election.
A broad coalition of organisations are calling for investment in renewable energy, energy savings through insulating and adapting buildings, and greatly improved public transport.
It is estimated that these measures would together create one million jobs, says FoE.
The campaigners are also calling for the UK to support a global agreement to cut warming emissions of all kinds.
Warren Davies, chair of Llangollen Friends of the Earth, said: “We want to ensure parliamentary candidates of all parties know that time is running out to take action.
"We are already seeing the devastating effects of climate change, and unfortunately the poor are being hit the hardest.
"It’s imperative that our government takes action now through these measures, which would also create a million new jobs for the UK.”
Some members of the Llangollen group also travelled down to London to take part in the national march.
Pauline Smout, from Llangollen Friends of the Earth, said “The march was absolutely fantastic, the diversity of groups taking part shows how much energy and passion there is for action on climate change.”
* See http://www.timetoact2015.org/ for more information on the Time to Act campaign.
Posted by llanblogger at 6:56 AM