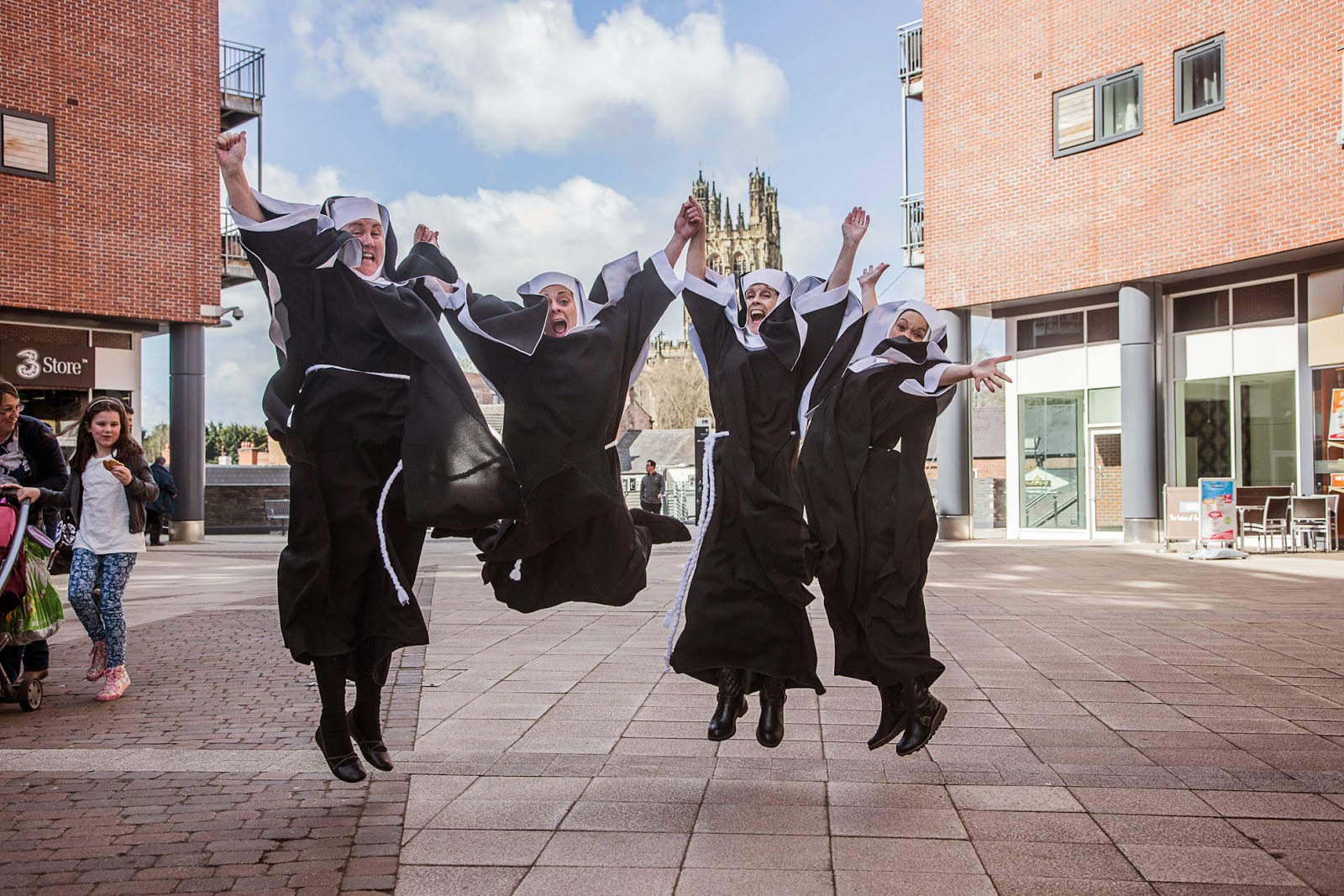 * Members of Llangollen Operatic Society take the chance to

Sassy nuns from Llangollen surprised shoppers when they broke out into song.
The harmonious group from the Llangollen Operatic Society was at Eagles Meadow shopping centre, in Wrexham to promote their production of the hit musical, of Sister Act.
They sang a heavenly 15 minute medley which included, Bless Our Show, Fabulous Baby, Sister Act, and Spread the Love Around.
The divine musical comedy, based on the hit 1992 film starring Whoopi Goldberg, will be on at Llangollen Town Hall from April 21 to 25 at 7:30pm.
There will also be a special matinee performance at 2:30pm on Saturday April 25.
The 40-plus cast includes sisters, priests, altar boys and even a bishop. 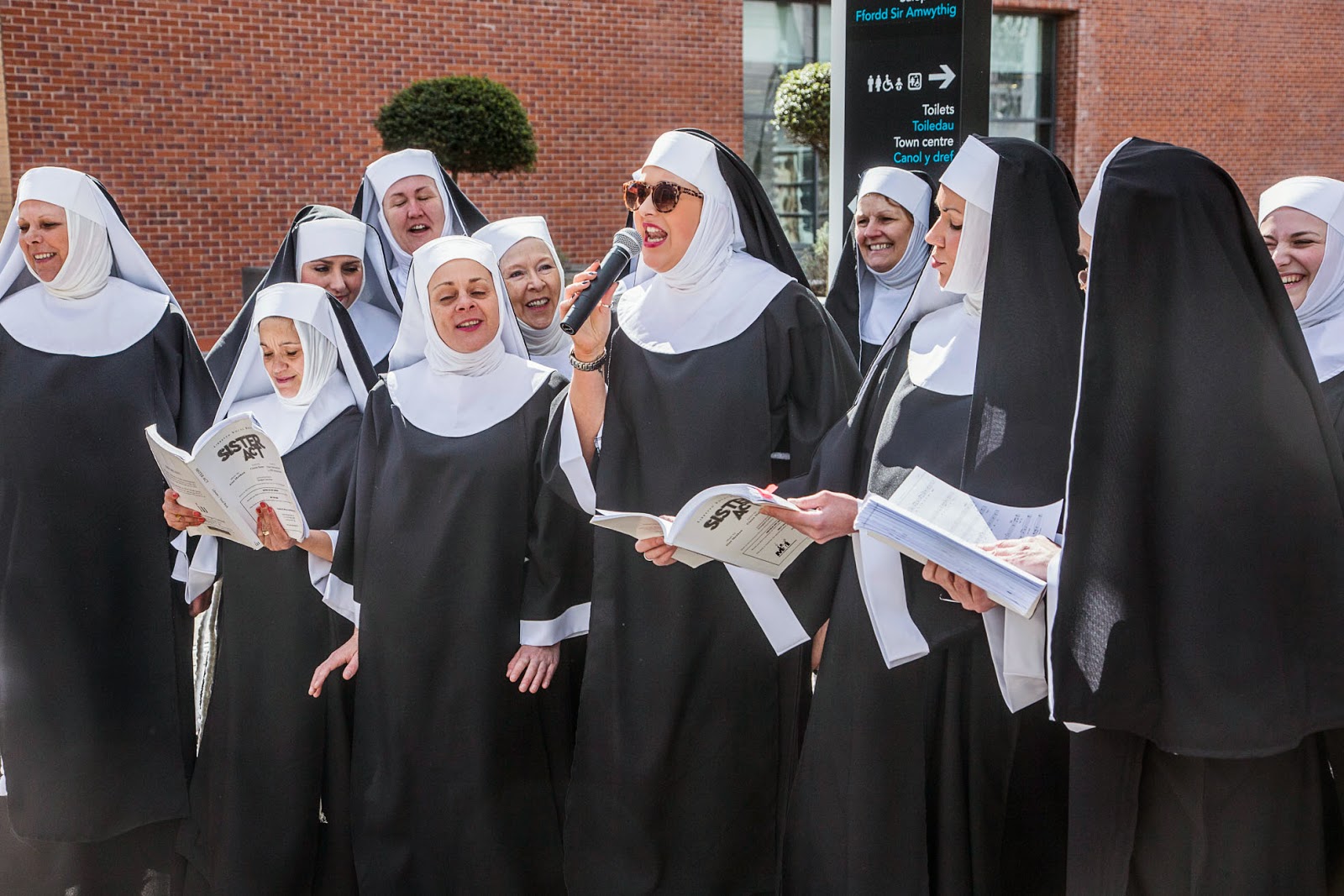 * Nuns tune up to delight Eagles Meadow shoppers with their Sister Act selection.
Though the songs are different, the plot is the same as the film, where lounge singer Deloris Van Cartier played by Whoopi Goldberg has to pretend to be a nun when her mob boss ex-boyfriend puts her on his hit list after she witnesses a murder.
The musical has featured on London’s West End and on Broadway in New York.
The Llangollen Operatic Society was one of only 50 amateur groups to be granted a special license to stage the production.
Tracey Rawlinson, the director of the production for the Llangollen Operatic Society, said: “It’s a fantastic opportunity for us to come to Eagles Meadow today to let people know about the show. Hopefully it will help us sell some tickets.
“We decided to do Sister Act because it’s just one of those films that everyone knows about. The plot is the same as in the film but the songs are different.
“We’ve got a great cast and we love the music. It’s quite a challenging show because normally we only have a two part harmony, but in this production there are songs where there are five part harmonies, which takes a lot of skill. There’s a lot of choreography in the show as well.
“We were one of only 50 amateur groups to be granted a license to do the show which is pretty prestigious.
“Recently a group of us went on a 10k fun run round the hills of Llangollen to raise funds for the Leonard Cheshire Disability charity. The weather was great and we raised £1,500. Half of the money will go to the charity and the other half is going to the Llangollen Operatic Society.
Shopper Becky Lloyd, 34, from Rhosddu, in Wrexham, watched the surprise performance with her son Rhys, 10.
She said: “Rhys has given it a big thumbs up. It wasn’t what we were expecting to see when we came to Eagles Meadow today. It’s a lovely surprise. They sound very professional. I think it’s brilliant – I love Sister Act. I’m hoping to go to watch it.”
Elen Haf Tayor, 19, from Wrexham, who is going to study at the Liverpool Institute for Performing Arts, is playing the role of Delores.
She said: “I’ve had to learn to be incredibly sexy and sassy for the role. I’m wearing the Delores animal print shades. I’m really excited about the production. I think it’s going to turn some heads. We’re hoping being here at Eagles Meadow today will help us generate some ticket sales.”
The ex Ysgol Morgan Llwyd pupil, added: “It’s been so much fun. This is my first project with the Llangollen Operatic Society. I was very nervous to begin with but it’s been great and they have made me feel so welcome.”
Eagles Meadow manager Kevin Critchley, said: “I absolutely loved Sister Act film when it came out and the musical version from Llangollen Operatic Society looks like it’s going to be fantastic.”
* Tickets for Sister Act cost £10 with concessions at £8. They are available at www.ticketsource.co.uk/llangollenoperaticsociety.
Tickets are also available at Jade’s Hair and Beauty Llangollen, and Llangollen Tourist Information Office, 01978 860 441.
Posted by llanblogger at 9:04 AM