New musical work to be premiered at Llangollen

A new work to celebrate the 150th anniversary of the Welsh colony in Patagonia in South America will have its world premiere in North Wales.
The concert at the Llangollen International Musical Eisteddfod on Wednesday, July 8, where the piece will be performed by the BBC National Orchestra of Wales will also star former royal harpist Catrin Finch (pictured below).
The work has been written by composer Hector MacDonald, a fourth generation Welshman who comes from Chubut Province in Patagonia where descendants of the original settlers cling on to their Welsh identity. 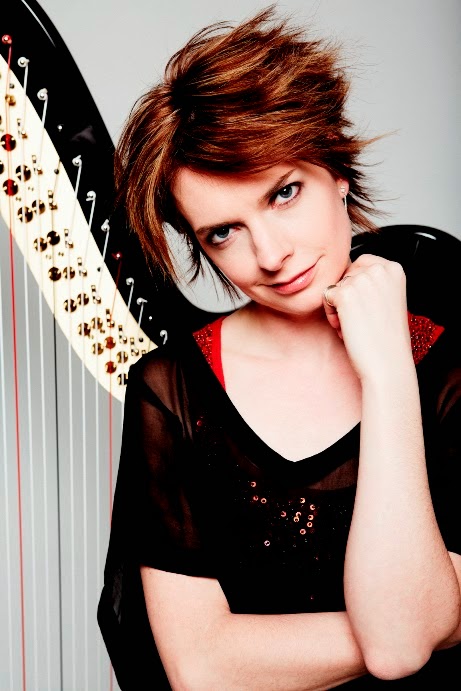 The migration was masterminded by non-conformist minister Michael D Jones, from Llanuwchllyn, near Bala.
He also considered Vancouver Island, in Canada, but eventually settled on Patagonia before around 150 people set off from Liverpool on May 28, 1865.
There are now many as 5,000 people in the Chubut area who still speak Welsh, and in recent years there has been a significant revival of interest in all things Welsh.
Eilir Owen Griffiths, the Eisteddfod's musical director, is delighted the anniversary of the Welsh outpost will be celebrated at the festival which starts on Tuesday, July 7, and runs until Sunday, July 12.
He said: “It’s wonderful that the Welsh community in Patagonia continues to thrive a century-and-a-half after it was first established.
“It’s always a pleasure to see a musician such as Catrin Finch take to the Eisteddfod stage. She has done so much to take harp music to the world and she is a wonderful classical musician and performer.
"The Sounds of South America concert will be a fitting tribute the courage and the endurance of the original settlers whose legacy lives on today."
Catrin’s career took off after she was named Royal Harpist to the Prince of Wales in 2000, a traditional position revived after a century-and-a-half.
She said: “I last appeared at Llangollen in 2002 and I’m really looking forward to going back to what is a very special festival.
“It’s remarkable that a small town in North Wales has the ability to draw so many top musicians from around the world. I really enjoy mopping up the special atmosphere there.
“I’m really looking forward to the concert. It’s an amazing thought that there’s a little Welsh community on the other side of the world. A piece of North Wales in Patagonia."
Catrin, who graduated from the Royal Academy of Music in 2002, says she will always be grateful to Prince Charles for asking her to become his first Royal Harpist.
She said: “It was a springboard for my career and I enjoyed a wonderful four years as Royal Harpist. It gave me the opportunity to expand my career and put the harp in the spotlight.
“In America because I was the Royal Harpist, they wanted to know more about the instrument and it gave me the opportunity to promote both classical music and the harp.”
According to Patagonian composer Hector MacDonald, whose uncle, Elvey MacDonald lives in Aberystwyth and  is a former director of the Urdd youth organisation, it was a "fabulous experience" to be able to work with Catrin and a world-class symphony orchestra.
Hector said: “I have been fortunate enough to have had several choral works performed in Wales but the opportunities do not exist in Patagonia for a composer to develop the skills required to write for a symphony orchestra.”
There will be a Patagonian theme on the field before and after the concert when the Welsh band, Brigyn, will be appearing on the S4C stage where they will be performing songs from their current CD that's been inspired by Patagonia.
Among the other highlights at this year's Eisteddfod will be the Thursday night concert when heart-throb tenor Alfie Boe will be joined on stage by Britain’s Got Talent star Jonathan Antoine.
Other big draws include Oscar-winning music legend Burt Bacharach, the immensely popular Canadian singer-songwriter Rufus Wainwright and TV choirmaster Gareth Malone.
For the final concert, Ali Campbell, the voice of UB40 who sold 70 million records, who'll be reunited on the eisteddfod stage with two other founding members of the group, percussionist, trumpet player and vocalist Astro and keyboard player Mickey.
Children’s Day and the Parade of Nations, led by Eisteddfod President Terry Waite will take place on the Tuesday afternoon before the evening Heart of Llangollen concert.
Wednesday’s programme will include a new competition for the International Young Musician of the Year as well as the Children’s Choir of the World while Thursday’s competitions will see another first, the International Voice of Musical Theatre Trophy.
The Blue Riband event, the Choir of the World for the Pavarotti Trophy, is decided on Saturday night as well as the Open Dance competition.
* To book tickets and for more details on the 2015 festival go to the website at www.international-eisteddfod.co.uk
Posted by llanblogger at 9:41 AM