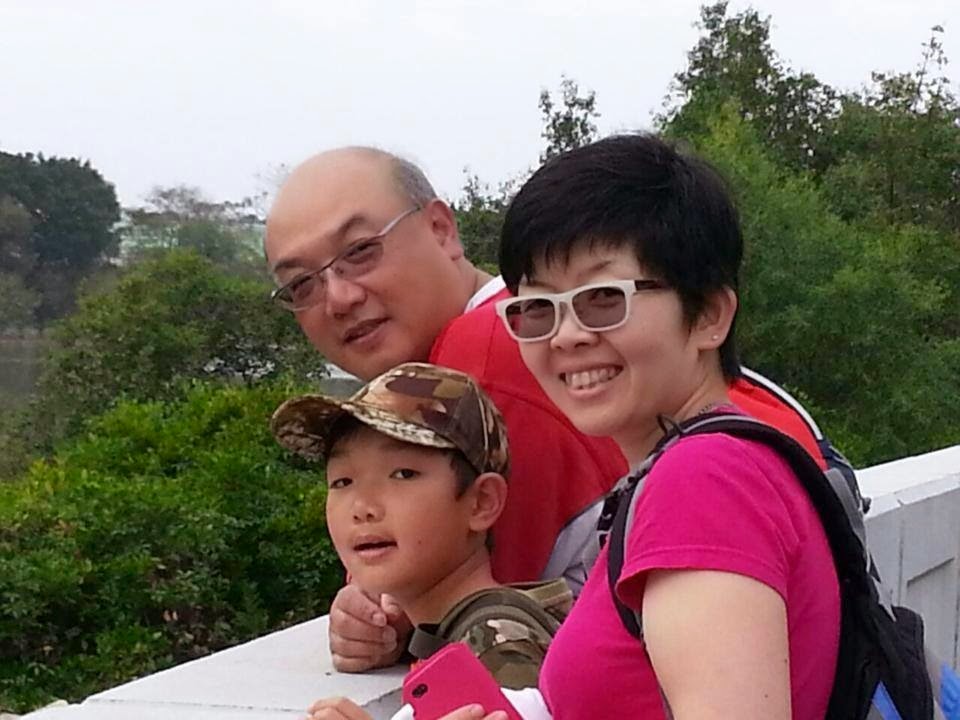 * Bill Kong with his family.
A wine expert from Hong Kong who fell in love with the Llangollen International Eisteddfod is flying 6,000 miles to work as a volunteer at the festival.
Bill Kong, 54, was mesmerised by the intoxicating magic of the Eisteddfod on his first visit as an audience member two years ago when he fulfilled a long-standing ambition to experience it for himself.
He was so taken with the festival's captivating atmosphere both then and in 2014 that he’s aiming to travel back to Llangollen this July to join the small army of dedicated volunteers who make the iconic cultural event such a big hit each year.
Bill’s links with Britain go back over 40 years to when he attended a prep school near Bewdley in Worcestershire then a public school near Uttoxeter in Staffordshire.
Later he went on to Manchester College, Oxford to study for a degree in social administration before returning to Hong Kong in 1984.
Bill joined the Hong Kong Welsh Male Voice Choir for there a couple of years later after being introduced to it by a friend.
He recalled: “My fellow choir members used to ask what my Welsh link was and I’d tell them that it was my old prep school in Worcestershire which was quite near the Welsh border.
“I performed with the choir in the London Welsh Festival of Male Voice Choirs at the Royal Albert Hall in 2004 at the invitation of the London Welsh and sang with in the chorus of the Hong Kong Art Festival’s production of Tosca in in 1999, which is where I met my wife Selena.”
When he’s not drinking in the joys of music Bill works, amongst other things, as a consultant in the wine business in Hong Kong and during the past 10 years has been a wine importer, educator, consultant to importers and wine judge.
He is also a senior training consultant for a large Hong Kong-based company specialising in risk and crisis management.
Bill’s 39-year-old wife, Selena Hoi Yi Fung Kong, is also passionate about music and has worked as a music educator at a school in Hong Kong for the past 17 years.
They have a nine-year-old son, Daniel, who is due to attend prep school in England from April.
Bill said: “I first came with my wife and son to Llangollen Eisteddfod back in 2013.
“We were very much looking forward to the visit because of my own 20 years plus with the Welsh choir and my wife’s work in music.
“We share our love of Welsh music and culture and have long been fascinated with such a mystical name as the International Eisteddfod. So we just had to come and discover for it for ourselves.
“We did not realise then how well we would be welcomed and that we would make so many friends that we would want to return year after year.
"Everything has been a real blessing, especially the community of new-found friends that we’ve met at Llangollen every year since.
“Although we have now been at the Eisteddfod for the past two years I haven’t so far done any work as a volunteer but when we come over again this summer I’m hoping to be able to contribute.
“Perhaps that might be by serving in hospitality, meeting performers from Hong Kong or China. I have some experience in that area after developing tailor-made workplace English courses for corporate companies in the hospitality industry back home.
“I could also maybe help out with the staging of the Eisteddfod as I worked as a stage hand when the Phantom of the Opera came to perform in Hong Kong in 1995.
“For the 160 shows I worked at `stage left prop’ and the amazing thing was that Peter Carey was Phantom on that occasion, interestingly a Welshman amongst a North American cast.”
Bill added: “I’d just love to be amongst the public and performers at the 2015 Eisteddfod in any capacity.
“One day I would also like to see my beloved Hong Kong Welsh Male Voice Choir compete at Llangollen. Last year we made great friends with the Hong Kong Police Choir and became their supporter at the Eisteddfod.
“I have been mesmerised by the magic of Llangollen and what I love about coming is the total experience of the whole week.
“That means the music, the performers as well as the visitors and above all the hard work and dedication of all the volunteers throughout the year who make the Eisteddfod the incredible event that it has become.
“The young and the more seasoned have all played their part in the history of something so unique and special by participating in the legacy of the festival for over half a century.
“This is what Llangollen Eisteddfod means to me and why I'm looking forward to coming for this my third year and participating even more than in previous years.”
Sandra Roberts, who chairs the Hospitality Committee for the Eisteddfod, said: “Bill sounds like a very interesting man who has the perfect skills for our hospitality team whose job it is to welcome competitors and visitors to the festival from across the world.
“His linguistic skills would obviously make him particularly useful when it comes to meeting and greeting people from China and Hong Kong and I think he would be a very valuable addition to our team of volunteers.”
Posted by llanblogger at 7:54 AM