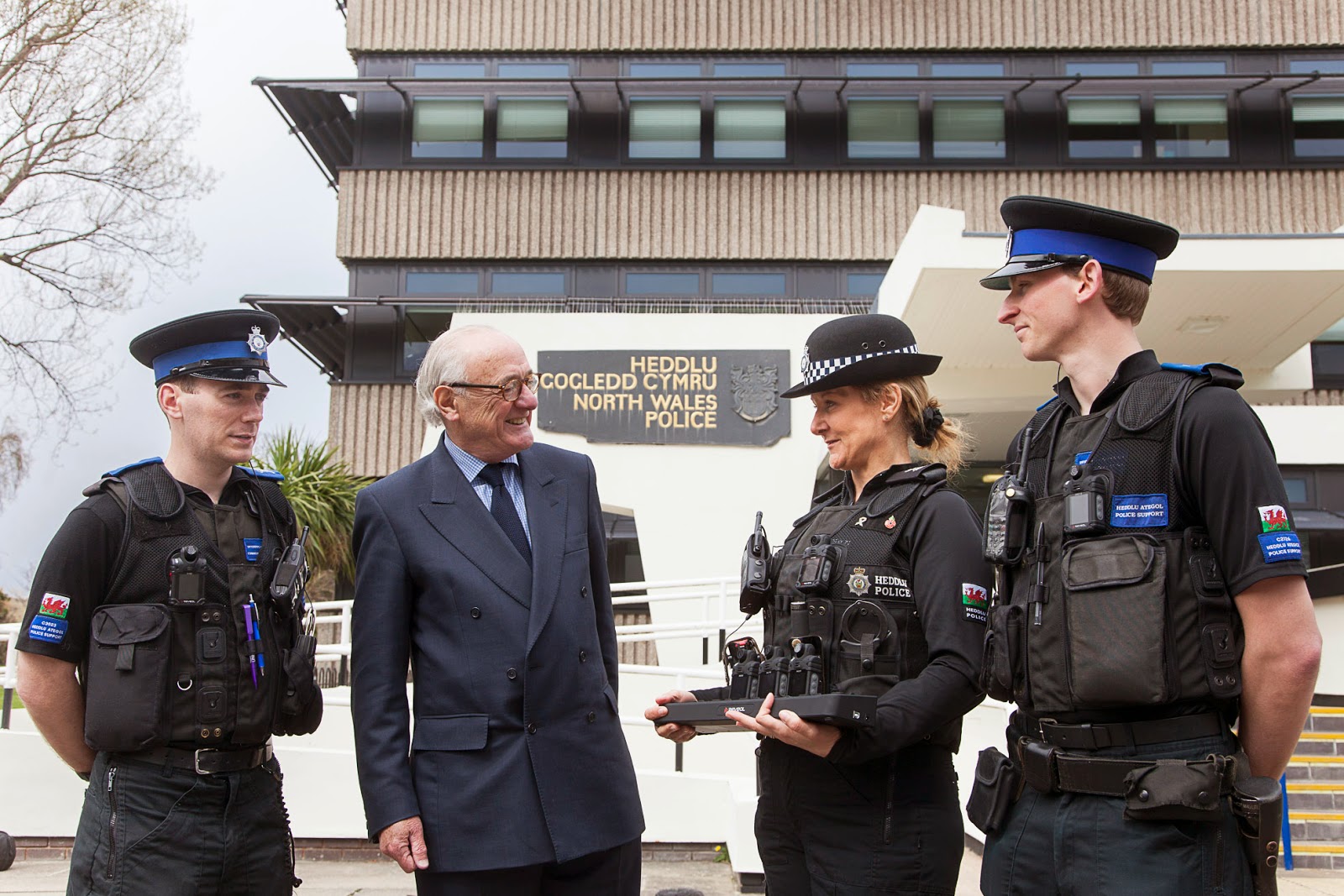 
Villains in North Wales will be caught on camera.
North Wales Police are introducing body worn video equipment so that evidence of crimes can be captured as they happen.
A total of 128 video camera kits will be deployed across the force area and will be worn by officers on their chest.
The introduction of the crime-fighting technology has been welcomed by North Wales Police and Crime Commissioner Winston Roddick CB QC, following a successful six-month trial last year.
Money for the initiative has come jointly from a special Ministry of Justice innovation fund and Mr Roddick.
It's hoped the use of the HD quality cameras will also reduce confrontations and the number of complaints whilst, at the same time, improving public confidence in the police.
Mr Roddick said: Body worn video is a good use of modern technology to improve the effectiveness of policing and of the criminal justice system more generally because the camera doesn’t lie.
"The camera films an event as it is happening which provides instant evidence which is contemporaneous.
"It can deter some criminals from committing a crime and also when they do commit a crime, it persuades them that there’s no alternative other than to pleading guilty.
"It’ll save a lot of money and not only in policing but also in the administration of justice, in court time, in particular.
"The technology offers protection to police officers and the public because the potential criminal knows that if he or she commits a crime within seeing distance of the lens, they’re going to be observed and they’re going to be arrested.
"This is a huge leap forward in terms of policing."
The Reveal Media devices are already being used by 30 forces in England and Wales and will provide an exact audio and video record of any incidents that are being filmed.
Once back at the police station, the police officer will dock the device and the video material automatically goes to digital store of evidence which is integrated with the force's central records management system.
One area where the cameras have proved themselves particularly useful is in the aftermath of an incident of domestic violence where evidence of any injuries and damage can be gathered along with the behaviour and demeanour of the aggressor and the victim.
A study conducted in Essex showed a significantly higher percentage of people were charged with offences when officers wore cameras, with 81 per cent of people charged compared to 72 per cent when officers did not wear a device.
Assistant Chief Constable Richard Debicki said: "Body worn video has been shown to be very useful operationally. For example, it has been seen to moderate the behaviour of some people who are acting aggressively, for example, in domestic abuse and public order situations.  This can help prevent a further escalation of violence and aggression if people know that they are being filmed.
"It provides strong additional evidence for use in court and I believe that it will help increase public confidence.
"Body worn videos provide a much better opportunity for producing best evidence in relation to domestic violence - a picture is worth a thousand words.
"The injured party may have injuries and marks on them which may not be visible later but will be instantly captured using the body worn video.
"You can imagine going to a distressing scene of domestic violence.  There might be damage and a complete mess in the room.
"You can also see the emotion and the willingness of the victim at that point to say what happened.
"So it’s very good to capture the scene at that point, as it was, in terms of the victim and the real impact and upset that these incidents have.
"As a result, it’s very good in increasing the success in terms of convictions and charges in domestic violence.
"As police officers we aim to protect members of the public and their property, and prevent, detect and investigate crime and prevent public disorder. I am confident that body worn video will be a big help in making North Wales an even safer place to live and visit.
"In addition, our officers face threats of danger on the streets every single day and body worn video will go some way to protecting them from harm."
Posted by llanblogger at 6:59 AM