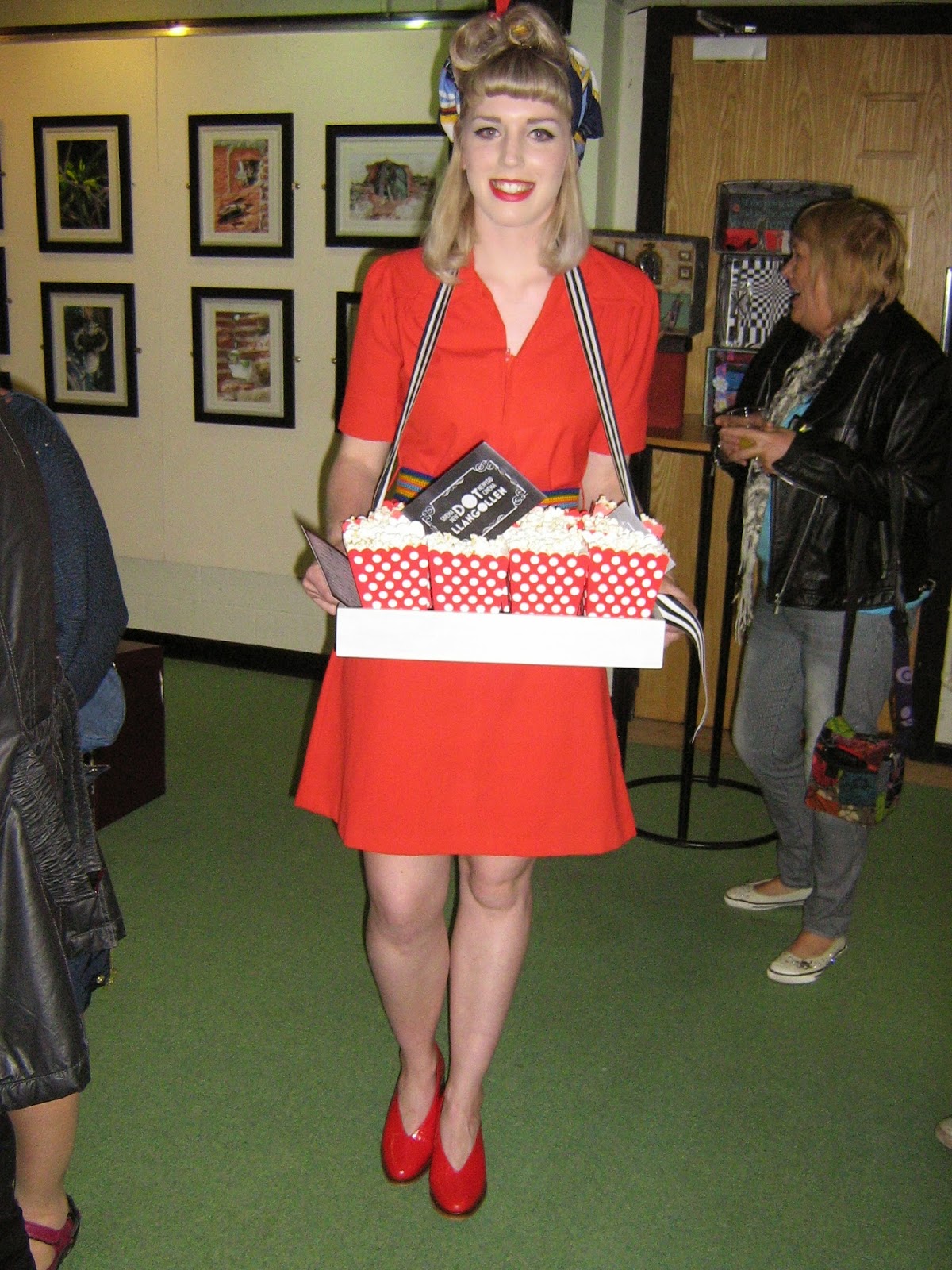 * Lottie Griffiths, of Lottie’s Bespoke Vintage in
Llangollen, dressed as a 40s style cinema usherette
to hand out popcorn at the launch of the New Dot
project at the town’s Pavilion.
Oscar-winning French film The Artist will be the first movie to be shown when a new community cinema has its premiere in Llangollen this summer.


The silent film, which won five Academy Awards in 2011, has been chosen to kick off the ambitious venture as it is itself about the golden age of the motion picture industry in the late 1920s.


As the launch of the project has been timed to coincide with this year’s Llangollen Fringe, details about it were given to people who gathered for the unveiling of the festival programme at the Pavilion on Monday night.


Called New Dot Cinema, Llangollen, it aims to bring together all ages in the atmospheric setting of the Town Hall.


The first cinema event is planned for the evening of Wednesday July 15, when The Artist will have its screening.


The cinema scheme is the brainchild of a Llangollen-based volunteer group who say they are keen to bring film-going back to town.


"Any surplus funds we raise will go towards putting on future shows and improving the cinematic experience for the town.”


As well as Kirsty, the group also includes local artist Simon Proffitt who said: "Quite a few people had mentioned recently that they’d like somewhere to watch films in town, so we got together and set up a community cinema.


“The night will be run as a pop-up event in the Town Hall on Castle Street and if all goes well we’ll continue with monthly screenings.


“We see it as a social event where people can sit around, have a drink, eat some cake, see a live performance and then a feature film.


“We want it to be a really engaging, socially based community event.”


Simon added: “The Town Hall is already a beautiful old building, and we plan to show off its character with atmospheric lighting and decor. The original red velvet seats on the balcony will offer a great view of the screen and cabaret-style seating."


According to Simon, the name New Dot  was inspired by the former Dorothy Cinema on Castle Street, which is now Cafe & Books.


He said: "We wanted to respectfully acknowledge the town's original cinema that many people have such fond memories of.


"The old Dorothy was opened in the 1930s, during the heyday of cinema, by the Horspool family.


"Llangollen Museum has a good display of original film programmes and old photos from the Dorothy that has been donated not so long ago by Fraser Horspool."


At the launch event, Llangollen’s Mayor, Cllr Bob Lube, said: “The Town Council is fully behind the new cinema project.”