‘Revolution’, which has been described as ‘a new, proactive approach to road safety education’, is aimed at 16 – 25 year olds who have been involved in or subject to driving offences in their area. The Welsh Government provided £118, 809 to fund the course over 2014 and 2015.
The course has been launched at Coleg Cambria, Wrexham, as a part of a week of multi agency activities to mark UK Road Safety Week. 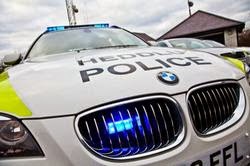 The interactive course, which has received funding from Welsh Government, will cover various aspects such as the consequences of fatal or serious injury road traffic collisions on the drivers, their passengers and their family and friends as well as the type of psychological, punitive and financial impacts being involved in a road traffic collision can bring.
Each event will also include engagement with a family member of someone killed in a road traffic collision as well as close quarter engagement with a realistic road traffic collision scene and measures taken to extricate a person from it. Attendees will also be given a project to complete as a team over the two days of the course.
A number of agencies will be inputting into the course with much of the learning based around the five main causes of fatal road traffic collisions in Wales, known as the ‘Fatal 5’ - speeding, alcohol and drugs, mobile phones, seat belts and dangerous and antisocial driving.
The courses will be based at various fire stations across North Wales, with the first course scheduled to be held in Prestatyn next month.
Simon Smith, Chief Fire Officer for North Wales Fire and Rescue Service, said: “We’re thrilled to be working in partnership with North Wales Police and the Welsh Government on this new course which looks at engaging with our young people in a proactive way to help them realise the consequences of their actions behind the wheel.
“We attend countless tragedies involving young drivers every year – road traffic collisions are the biggest cause of death among young people, so looking at new ways of raising awareness of road safety is vital.”
Chief Inspector Darren Wareing, Roads Policing Unit, North Wales Police: "By working closely with our colleagues at the Fire and Rescue Service we welcome the opportunity to help  address the issue of road safety and try to improve road user behaviour.

"All too often, both the Police and Fire and Rescue Service have witness the carnage on our roads when lives are completely destroyed following a serious road traffic collision.

"The pain and avoidable deaths such as those on our roads touch family, friends and communities right across North Wales. By working together we hope to raise awareness and educate drivers of the consequences of poor behaviour behind the wheel."
Local Government and Government Business Minister, Lesley Griffiths AM said: “In Wales, young drivers make up 12% of the population, but in 2012 they accounted for 24% of killed or seriously injured casualties.
“Fatal accidents are a tragedy for so many families and the larger communities, but when they are caused by collisions which could have been avoided, they seem all the more tragic.
“I am pleased the three Welsh Fire and Rescue Authorities planned events to mark Road Safety Week. This new course expands on the education of our young drivers, focussing on the five main causes of fatal traffic accidents and has the potential to save hundreds of lives.”
.
Posted by llanblogger at 7:28 AM