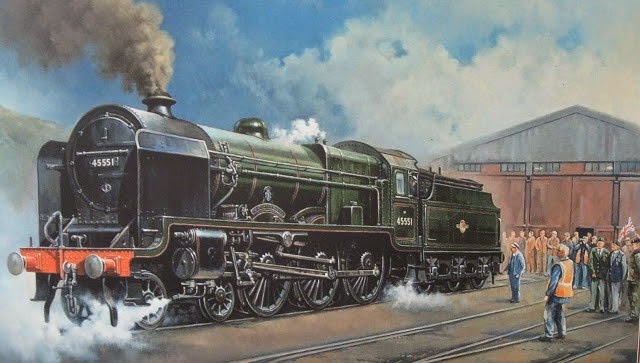 * An artist’s impression of how The Unknown Warrior will look on its launch day in 2018.

VISITORS to Llangollen Railway are being invited to tuck into fish and chips to help top up the £1.5 million fund to build a new steam engine to mark the end of World War One.


Specialist engineers at the heritage railway are steaming ahead with the ambitious scheme to create an entirely new locomotive, to be called The Unknown Warrior, by November, 2018 – exactly a century after the guns fell silent on the Western Front at the end of the 1914-18 conflict.


The aim of the LMS Patriot Project is to commemorate all those who died in the “war to end wars”.


To keep the building project rolling regular cash injections are needed, and the latest fundraiser will the running of a fish and chip special train from Llangollen Station on the evening of Saturday, July 19.

A steam-hauled dining train called The Patriot Plaice, complete with restored nostalgic 1950s carriages, will make a round trip along the Dee Valley to Carrog.

At a cost of £17 per person, a meal will be served at your seat just after leaving Llangollen.

To wash it down there will be real ale, wine and soft drinks available on board the specially chartered train, which departs Llangollen at 6.30pm.


The LMS-Patriot Project was launched by heritage railway enthusiast David Bradshaw with the aim of building a new Patriot class loco, the originals of which ran in the 1920s and 30s.


This will tour heritage railways across the country and will also be capable of running on the mainline rail network.

Finance for the project is coming from public donations, legacies, commercial sponsorship and grant applications.

It has received the endorsement of the Royal British Legion, and the engine will carry a Legion crest above its nameplate.

Many original LMS drawings have been obtained for the project and, where necessary, draughtsmen are preparing new plans using computer techniques which produce them in 3D.

Other workshops around the UK are making components for the new loco.

The massive chassis of The Unknown Warrior has now been laid, using heavy gauge steel plate and enormous castings, at a cost of £48,000.

While some of the components for the engine are new, others are being reclaimed from scrap or bought from private railway collections.

All places on the Patriot Plaice Special must be pre-booked and reservations should be made not with Llangollen Railway but direct with the LMS-Patriot Project by emailing: office@lms-patriot.org.uk, or by writing to LMS-Patriot Company Ltd, PO Box 3118, Hixon, Stafford ST16 9JL.
Posted by llanblogger at 7:56 AM