Don't be in two minds about Jekyll & Hyde 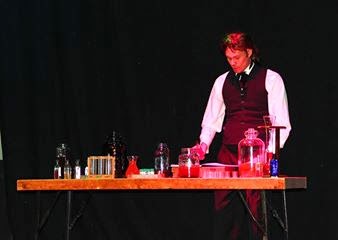 * John Whitfield in the title role of Jekyll & Hyde at Llangollen Town Hall.


Anyone in two minds about whether to go and see Limelight’s current production of  Jekyll & Hyde at Llangollen Town Hall should have no doubts about whether it’s worth it or not – because it’s brilliant.
The musical thriller is based on the novel The Strange Case of Dr Jeyyll and Mr Hyde by Robert Louis Stephenson.


Originally conceived for the stage by Frank Wildhorn and Steve Cuden, it features a cracking score by Wildhorn, a book by Leslie Bricusse and lyrics by Wildhorn, Bricusse and Cuden.
Henry Jekyll, a respectable Harley Street doctor in Victorian London, is carrying out experiments on the good and evil in every person when his research is brought to a halt by the scientific establishment’s refusal to allow him to test his theories on a human subject.


Undaunted, he uses himself for as a guinea pig and swallows down an ampule of the stuff which transforms him from a man of goodness to a beast of pure evil – Edward Hyde.
Naturally, things go steadily downhill from there and he reaches the point where the  psychopathic alter-ego finally takes him over.


Along the way Hyde commits a spate of ghastly murders, which means there’s no way back for Jekyll, who is superbly played by John Whitfield and has a voice to match his powerful acting ability.
Whereas film versions of the story have seen Jekyll undergoing the transformation to Hyde with the aid of all kinds of gruesome make-up, director Lyn Aston, who also choreographed the production, steers away from all this over-the-top stuff by achieving the change through clever coloured lighting effects and a reliance on John’s sheer acting talent.


It works extremely well and he scares the pants off the audience as he heads off into the London night on his killing sprees.
There’s some sensational singing from both Jekyll’s love interests, Liz Jones as his society fiancé Emma Carew and Debbie Louise Peate as Lucy Harris the tart with a heart who falls for him on one of his ventures into the darker side of London.

If you fancy seeing it, Jekyll & Hyde is on tonight (Saturday June 7) at the Town Hall for the last performance of its three-night run, starting at 7.30pm.
Posted by llanblogger at 2:51 PM