The national All Wales Summer Anti Drink/Drug Drive Campaign 2014, backed by all four Welsh Police Forces, has now begun.
Led by South Wales Police, the month-long campaign throughout June will see forces increase the pressure and focus on those drivers who drink and drive or drive under the influence of drugs.
There will be increased stop checks to catch those breaking the law, reinforce the message and educate drivers. 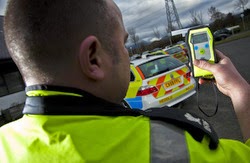 Chief Inspector Darren Wareing, from North Wales Police’ Roads Policing Unit, said: “With the summer season now upon us, more people may be tempted to have a few drinks especially at barbecues or whilst drinking in beer gardens during the afternoons, and may drive without thinking of the consequences.
“The World Cup is also two weeks away and that will no doubt see an increase in the number of people watching some of the games in the pub.
He added: “Think before you go out, watch what you drink and plan how you will get home.”
North Wales Police has a robust strategy around enforcing the ‘Fatal 5’ offences which are drink and drug driving, dangerous driving including unnecessary risk taking, speeding, failing to wear a seatbelt and using a mobile phone whilst driving.
Chief Inspector Wareing explained: “We are committed to assisting in reducing the risk of becoming a casualty on the road through the use of targeted operations around high risk groups of people and locations while enforcing the ‘Fatal 5’ offences.”
“If you drink and drive you will potentially not only ruin your life, but the lives of others innocently associated with you and your actions. There is absolutely no excuse for drinking and driving and the consequences can be devastating.
“You not only risk killing or seriously injuring yourself or someone else, but you will end up in court and could face a fine, lose your licence or receive a jail sentence. You will have a criminal record and you could lose your job.”
Anyone with information regarding individuals who are believed to drive whilst over the legal limit or under the influence of drugs, can contact North Wales Police on 101 or Crimestoppers anonymously on 0800 555 111.
Posted by llanblogger at 4:57 PM