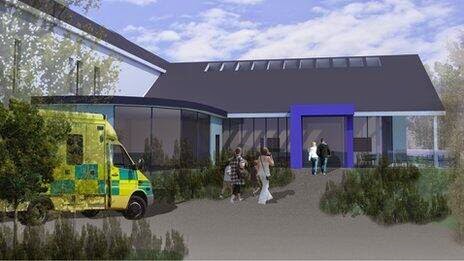 * An artist's impression of the new Llangollen health centre.

Campaigners have restated their calls for hospital beds to be included in the plans for a new health centre in Llangollen.

The Welsh Government last week announced that it will provide £5 million of funding for the development on the site of the derelict River Lodge.
Mabon ap Gwynfor, of the Keep Llangollen Health Services campaign group, said: “They’ve been dragging their feet for far too long. The hospital closed its doors a year and a half ago, and since then Llangollen and the Dee Valley has had to suffer a second class health service, with patients having to travel to Deeside or Mold for hospital beds.
“Of course, a £5 million investment is to be welcomed, but this shouldn’t distract us from the fact that, even with the new centre health, services in the area will have been diminished.
“We have raised questions about the suitability of the placing of the new centre for some time. Road safety and ease of access is a huge concern as well, which are as yet unresolved.”
According to Mabon ap Gwynfor, people in Llangollen shared these concerns.
Pat Jeffares, Councillor for the nearby Llangollen Rural ward, said: “Llangollen hospital beds are a must, as it served my ward Llangollen rural for respite care down the years. It also reduced bed blocking at Wrexham hospital, which is now causing major problem at Wrexham hospital.”


Former nurse, Mrs P McBroom said: “It would really benefit the community in Llangollen to have some beds available in the health centre. It would free up beds in the Maelor hospital and provide care for patients who just need further convalescence before being discharged, especially people living on their own. It would also allow terminally-ill patients to be nearer home and their friends.
“As a former nurse I find it very sad to see these community hospitals closing down and the already over stretched Hospitals having to cope."


Jacqueline Lewis said: “Yes, I do feel that we need beds in Llangollen and I also think Llangollen hospital should never have closed. You can see the impact that it has had on Wrexham Maelor Hospital.”
Eve Slawson said: “(Having hospital beds) absolutely would definitely benefit our community and whole heartedly support your cause to have hospital beds in Llangollen. “
Carole Jones said: “I definitely agree we need hospital beds  in the new Llangollen Heath Centre.”
David Roberts said: “Hospital beds should be included in Llangollen health centre. It’s much better for elderly people to convalesce in their own town and so lessen bed blocking at Wrexham Maelor.”
Helen Roberts said: “Definitely, hospital beds should be included in the new Llangollen Health Centre. It’s essential to ease the burden on Wrexham Maelor and to ease visiting for friends and family.”
Gillian Thomas said: “Yes, I do think there should be beds in the new health centre and I am surprised they have not been included in the plans.”
Paul Roberts said: “I certainly believe that hospital beds should be included in the new Llangollen Centre. Apart from the obvious and reasons, you could argue that it is another devaluation of local services in one of the county's major tourist and popular family location. People still have to take time from work here as the surgery has no weekend or after-hours.”
Mary Connolly said: “Absolutely. The centre should have plenty of room for hospital beds, and also a proper outpatients for emergency/run of the mill mishaps. There will be a lot less need for people to fill up A&E in Wrexham if they can get local treatment, as was available in the old Llangollen Cottage Hospital. We sorely miss it.”
Kathy Davies said: “I strongly agree that there is a need for hospital beds in Llangollen as there are many residents in Llangollen struggle to go to visit relatives in hospital especially when they are sent as far away as Deeside and also think there should be an accident and emergency unit here too, why should we have to travel all the way to Wrexham to be seen.”
Posted by llanblogger at 7:00 AM