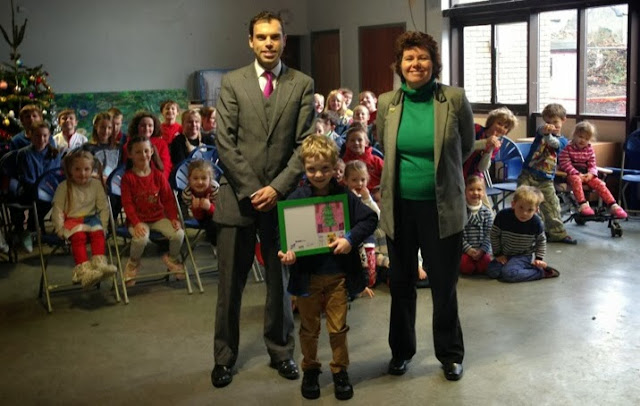 
The Labour politicians met Sam Jones from Ysgol Bro Dyfrdwy in Cynwyd on Friday (December 6), whose festive design was chosen by the First Minister of Wales Carwyn Jones as his favourite from more than 100 entries.
Mr Skates said: “Sam’s colourful Christmas tree was just what we were looking for and will be the main image on the cards we will send out to hundreds of constituents, businesses, schools and voluntary groups across the constituency.
“The competition was open to pupils of all junior schools in Clwyd South and such was the quality of the entries it wasn’t easy choice for the First Minister, so he has also chosen three runners-up whose designs will also feature on our card.
“We had more brilliant entries than ever this year so I’d like to say a big thank you to all the children who took part and the teachers who encouraged them.”
The runners-up were Harvey Arleinstall from Johnstown Junior School, Crystal Adlington-Jones from Cefn Mawr County Primary School and Finlay McLellan from Ysgol Bryn Collen, Llangollen.
Ms Jones said: “The Christmas card competition is a fun way for us to engage with local schoolchildren and it is fantastic that so many have taken part. This year we have yet again received a wonderful selection of amazingly creative entries.
“I really enjoyed meeting Sam and congratulating him personally. Well done also so Harvey, Crystal and Finlay, who would all have been very worthy winners. They have done themselves and their schools proud.”
Posted by llanblogger at 8:24 AM