Along with the complementary mince pies, a packed audience enjoyed every tasty morsel of festive entertainment which was served up, ranging from traditional carols and songs to a clever little playlet with a strong Christmas theme. 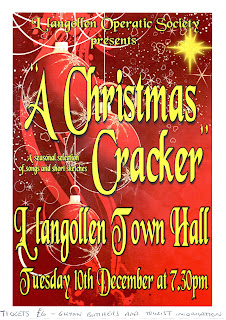 First to take the stage were members of the society’s talented travelling troupe who performed a couple of perfectly executed and joyous seasonal numbers.
Next on stage came Chrissie Ashworth with a neat slice of Scouse-flavoured fun in the shape of a passage about a school nativity play that goes hilariously wrong.

Then it was the turn of Helen Belton and Louisa Jones to harmonise over two exceptionally beautiful seasonal songs.

They were followed by a group of youngsters from the society’s junior stage section, the Young ‘Uns, who presented a selection of Christmassy songs.

A clever reading on the theme of a young person's experience of Christmas was delightfully performed by Carys Stallard.


And a  couple of neat monologues, based on scenarios before and after Christmas, were skilfully delivered by Sue Price and Jeanette Robinson.
The first half of the show was brought neatly to an end by a tuneful trio headed by Chris Simms and including singer Beccy Evans who offered somne up-tempo versions of seasonal standards such as Jingle Bells.


A novel touch came in the second half when some of the society’s best-known performers, augmented by a few relative newcomers, put on a 20-minute play in which a couple of families warring over who has the best Christmas displays in their front gardens finally make peace over a big bowl of punch and some timely carols.
Chris Simms was back at the keyboard to lead a willing audience in yet another selection of carols and a rousing rendition of The Twelve Days of Christmas.


All in all the evening provided the perfect start to the festive season.
Posted by llanblogger at 8:13 AM