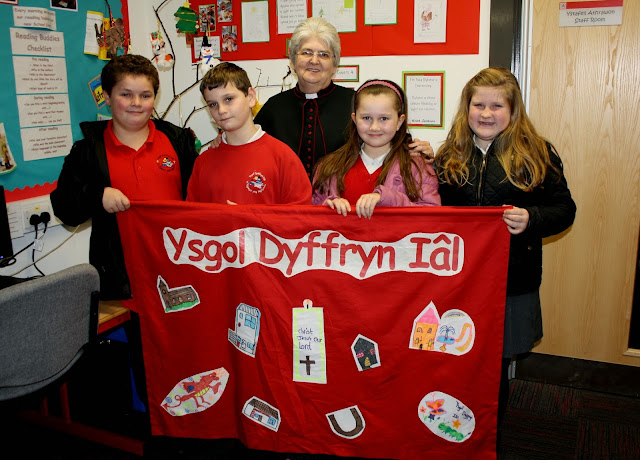 As Archdeacon, Shirley has carried out work on behalf of the Bishop of St Asaph in Wrexham and in parts of Flintshire, Denbighshire and Gwynedd.  She was the first female Archdeacon in the Diocese of St Asaph.

Shirley has served in the Diocese as a Reader (lay leader), a Deacon and a Priest before becoming Archdeacon in 2010.  Her ministry has spanned 40 years.  She was one of the first three women to become Readers in the Diocese of St Asaph before being made Deacon here in 1982 and then being ordained as a Priest in the Diocese of Ripon and Leeds in 1995.

Reflecting on her time with the Church, Shirley said: “Having started at a time when women couldn’t even take a service in the Church I’m retiring at a time when the Church in Wales has just agreed that women can be Bishops – not that I would ever want to do that, there’s enough hassle as an Archdeacon!

“I’ve got mixed feelings about retirement because I enjoy my work very much and I shall miss visiting parishes, working with clergy and being part of the Bishop’s staff team – although there are some problems I shall be happy to stop dealing with – fortunately the good parts have outweighed the difficult parts.”

Shirley has served as Rector of Llandegla and Vicar of Bryneglwys during her time as Archdeacon of Wrexham and helped to see a new school building for pupils at Ysgol Dyffryn Iâl come to fruition.  She has helped the children to produce a banner for their new facilities and will carry on being creative in her retirement.

She added: “I’m looking forward to taking up needlework again.  I used to teach it many years ago and I have very little time for doing it these days so I look forward to improving my needlework skills.”

The new Archdeacon of Wrexham will be the Revd Prebendary Bob Griffiths who will begin work on New Year’s Day.
Posted by llanblogger at 7:58 AM