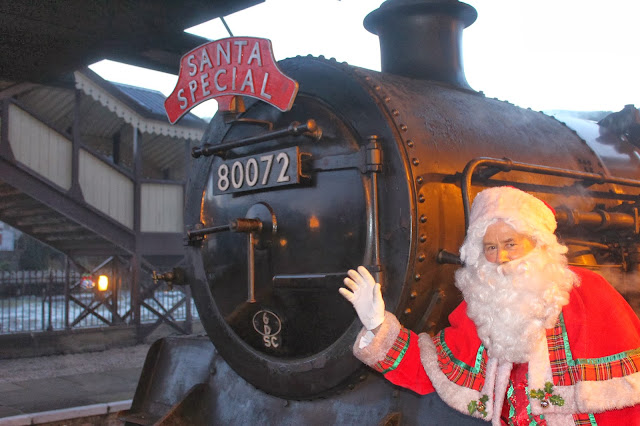 *Santa with his special steam engine on arrival back at Llangollen station.

With the season of Santa Special trains coming to an end on Christmas Eve, Llangollen Railway is preparing for the running of daily services throughout the festive season, up to and including New Year.

The railway reports an excellent pre-Christmas season with full loadings on many days of the Santa Special trains which have taken families to see Santa in Lapland at Carrog.

Of the 42 Santa Special trains which have operated since November 30, most were fully booked weeks ago.

Family groups have come to Llangollen to see Santa on the steam train from the railway’s 50 mile catchment area drawing people in from a wide segment of England, as well as North Wales, and the visitors provide a welcome boost to the town in mid winter.

For those who missed out on a chance to meet Santa on the steam train, a series of Mince Pie Special trains will operate on the Dee Valley Line from December 26 to January 1.

Running three times a day, departing Llangollen at 11am, 1pm and 3pm, the steam trains will take visitors into a winter wonderland on the journey through to Carrog when mince pies and mulled wine are served to passengers as festive cheer.

George Jones, for Llangollen Railway, said: “A ride on the train followed by a brisk walk in the country from one of the railway’s stations is an ideal way work off any excessive eating or may be blow away the post Christmas blues!

"There are several short walks from all three stations along the line which provide easy opportunities to get out and enjoy the area of outstanding natural beauty which is the Dee Valley.

“Once again the Llangollen Railway will be providing the only steam hauled standard gauge train service in North Wales, and beyond, on December 26 when much of the National Network remains closed.

"It is thanks to all our volunteers that these trains run and we can provide festive entertainment for those who wish to sample a ride on a preserved railway beginning from within the World Heritage site at Llangollen.”
Posted by llanblogger at 10:11 AM