HSBC will not leave behind ATM when branch closes 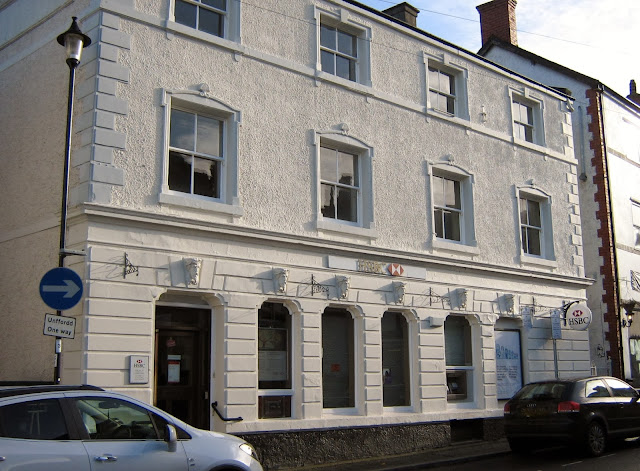 * The HSBC branch in Bridge Street earmarked for closure next February.


An HSBC bank boss has ruled out leaving behind a cashpoint when the branch closes as planned early next year.
The revelation came following a recent meeting to discuss the controversial closure between Assembly Members Mark Isherwood and Ken Skates and Andrew Tamplin, regional service manager, South West and Wales region, for retail banking and wealth management.


In an email sent to the two AMs after the meeting and copied to llanblogger by Mr Isherwood, Mr Tamplin says: “During our meeting we discussed the Cash Machine in Llangollen.
“We have looked at usage, and the current availability of ATMs within Llangollen, and as discussed on the day,  there are many fee-free cash machines in the town and as such we will not be leaving an ATM when the branch closes next February.

“Thank you for your time when we met, and I hope the above information is useful.

“As discussed on the day, if you have any specific customer issues, please let me know and we will do our utmost to help and resolve.”

Soon after the closure decision was announced by the bank, a group of local residents, led by members of the town’s Chamber of Trade and Tourism, held a demonstration outside the branch in Bridge Street, asking for HSBC bosses to reconsider the move.

Martin Crumpton, chair of local group Keep Llangollen Special, said: "The programme of closures by HSBC and others since 2009 is being interpreted as their response to the report by Sir John Vickers into banking reform following the wrld’s biggest crash since the depression of the Thirties.

"In short, ring-fencing has forced them to choose between the dull, staid world of retail banking and the lucrative world of casino banking, where the banks themselves determine the house odds.

"Those at the top are so addicted to it they’d rather sell-off the ball and chain of branch banking, and when you consider that branches are the prime source of new accounts, the conclusion is inevitable.

"Keep Llangollen Special is talking with a new, community-minded alternative that enshrines face-to-face banking with profits ploughed into the community, and we’ll need the backing of the business sector. We’ll have more news in the new year." * An online petition has been started urging the protection of banking services in vulnerable communities. It can be seen and signed at: https://www.assemblywales.org/epetition-list-of-signatories.htm?pet_id=947

Posted by llanblogger at 8:18 AM