Health board speaks out on future of two Llan landmarks 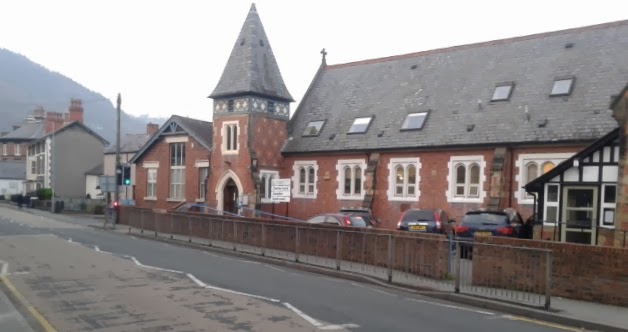 * The health centre in Regent Street.

llanblogger has been given an insight into what the future might hold for two landmark buildings in the town.
The former Cottage Hospital in Abbey Road now lies empty after being closed amidst a storm of public protest last March.


The death knell was also sounded for the health centre in Abbey Road when plans were unveiled earlier this year to build a new £5.5 million replacement for it on the site of the old River Lodge on the A539.
In view of local speculation about the fates of these two buildings, we asked the Betsi Cadwaladr University Health Board (BCUHB), which owns then both, what plans it has for their disposal.


A BCUHB spokesperson said ¨We have received Welsh Government approval to dispose of the former Llangollen Hospital premises, and at the moment we are advertising its availability to other public sector organisations.
“If none of our public sector partners have need of the site it will be placed on the open market.


“Once the business case to develop the new primary care resource centre in Llangollen is approved we will follow a similar process for the health centre in Regent Street when services have moved from the building.”
Meanwhile, the 137-year-old hospital lies empty, boarded up and surrounded by security fencing.


A planning application for the new health centre was recently submitted to Denbighshire County Council.
·        We’d like to hear our readers’ views on what they believe should happen to either of these buildings. Let us know what you think by contacting us at: llanblogger@gmail.com

* First comment has come in from Martin Crumpton, chair of Keep Llangollen Special, who says:


When the surgery on Regent street finally closes its door, it leaves behind one of most accessible buildings in Llangollen. Given its adjacency to the community hall and its access for disabled people – and most of all, parking, if that can be negotiated with the Church - it is ideal for a community drop-in centre (also known as a hub) for Keep Llangollen Special and other groups in the community. There is a need for, but a shortage of, free meeting places.
Regarding the Cottage Hospital, we think that Betsi Cadwalad should bear in mind the general well-being of Llangollen. If they find no takers in the public sector, they plan to place it on the market. We would suggest there’s something missing between the two; to see if the community could find a perfectly good use for it, perhaps a town cinema or a fitness centre now that it seems Plas Madoc is to be axed and maybe even offices for start-up businesses.

Secondly tend to I agree with Martin that the GP Surgery is worthy of consideration as a Business and Community Hub (BACH) if the former HSBC Bank building is not available. Whichever property is available to the Community it would need to be subjected to a thorough investigation and structural survey to assess it's suitability and viability for conversion to a hub facility. The cost of conversion and future running expenses would be assessed as part of a comprehensive Business Plan for the BACH based on the model of Glyn Wylfa, Chirk which is run by a Community Development Trust:

There are various sources of funding for these type of projects which normally attract the support of Welsh Government and relevant Local Authorities and it would be useful to hear what residents, businesses and everyone who have the best interests of Llangollen at heart.

Mike Edwards
Posted by llanblogger at 8:16 AM