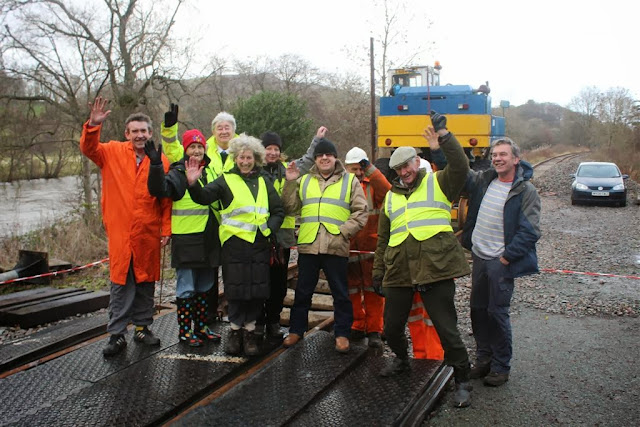 * Representatives of the Corwen community on site during their visit
to the railhead near Bonwm.

Representatives of the Cowen community joined volunteers from Llangollen Railway Trust for a landmark occasion in the track extension project yesterday (Friday).

Two separate lengths of track were joined together near the Bonwm Bends on the adjacent A5 road to complete two miles of track west of Carrog station.

A golden fishplate was ceremonially fixed to the final rail joint to mark the volunteer effort which has seen over a thousand yards of track laid eastwards from the restored overbridge, near Plas Derwen, towards the existing railhead at Bonwm.

A volunteer workforce has achieved this milestone working two days a week throughout the autumn to assemble panels of track on a prepared base.

Denbighshire county councillor Huw L Jones, who assisted with fixing the fishplate, said: “A most impressive length of straight track has been assembled in recent weeks by the volunteers.

"Their achievement is clearly visible to users of the A5 road and has raised hopes for the early completion of the project.

"Today’s link up represents 80% of the track work necessary to bring the railway to Corwen in 2014.”

Speaking for Llangollen Railway Trust, the Corwen Extension Project Co-ordinator, Richard Dixon-Gough, from Llangollen, said: “The work has been undertaken by a volunteer workforce varying from 6 - 20 workers on site, comprised mainly of members over 60 years old age. In the course of 16 volunteer working days they have laid 52 panel of track.

“We have to thank many people and organisations for their help with this project. The extension has needed administrative, financial, verbal and physical help which has been forthcoming from Denbighshire County Council, Welsh Assembly, councillors and community leaders, members of the community and the Railway’s members.

“We still have some way to go yet, but with continued support from everyone we will be at our temporary station site in the near future. The next challenge is to lay 46 panels of track, plus installation of our buffer stop. This further stage requires purchase of a thousand concrete sleepers and all their fittings, plus ballast, and will present a financial challenge for the Trust.”

A Corwen Sleeper appeal has been launched on behalf of the Llangollen Trust by member Paul Bailey, aiming to raise £20,000 to finance the acquisition of the material.

A generous response from supporters has so far raised half that sum.