Group honoured for its community efforts 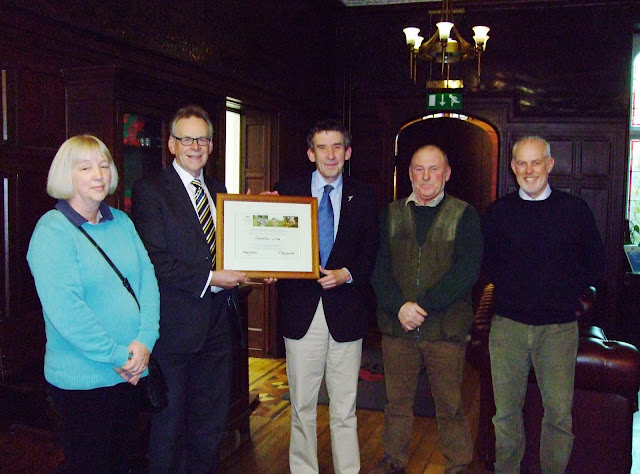 * The award being presented to John Gambles by Councillor
Huw Jones (right) Shep Evans (Cymdeithas member)
and AONB Officer Howard Sutcliffe, and t(o the right)
Joy Roberts (Cymdeithas member).
A community group in Llantysilio has been recognised by the Clwydian Range & Dee Valley Area of Outstanding Natural Beauty (AONB) team for successfully establishing a community centre for the village.

The AONB Award for 2013 has been given to Cymdeithas y Cwm, a voluntary group which was founded in the early 1980s when the two village pubs, The Sun and The Conquering Hero were both, at that time, closed down.

Cymdeithas y Cwm was soon established with an annual programme of events that included a horticultural show and fete, bonfire and fireworks and a Christmas party for the whole village.

In 1997 the charity was successful in gaining the support of the National Lottery Charities Board to buy and convert The Conquering Hero or The Conq (as it is known locally) into a community centre for the village, and it has since hosted numerous events including weekly youth club, evening classes, community council and committee meetings, Llantysilio Diners Club, and children’s parties.  The charity continues to be committed to maintaining the facilities at Llantysilio Green for the benefit of the local community and visitors to the area. They also offer an employment opportunity and affordable accommodation to local people and support local businesses wherever possible.  Clwydian Range & Dee Valley AONB Officer,  Howard Sutcliffe said:  “The communities of the Clwydian Range& Dee Valley AONB are a fundamental part of our outstanding landscape and the work and efforts that have taken place in Llantysilio to provide a community centre for the benefit  all of the communities  is inspirational. The Award is very well deserved."

Councillor Huw Jones, Vice Chair of the Interim Joint Advisory Committee, said he was very proud that the communities of the Dee Valley had won the award this year; the group had shown real leadership in partnership work within the AONB.

On receiving the award on behalf of the group, John Gambles said: “We all enjoy living in such a beautiful and welcoming place and Cymdeithas has over the years enjoyed trying to add to this. We are surprised but delighted to receive this Award from the AONB on behalf of all of people who have contributed to Cymdeithas over the last 30 years; it is also a chance to thank Denbighshire County Council for the support they have given us."
Posted by llanblogger at 8:13 AM