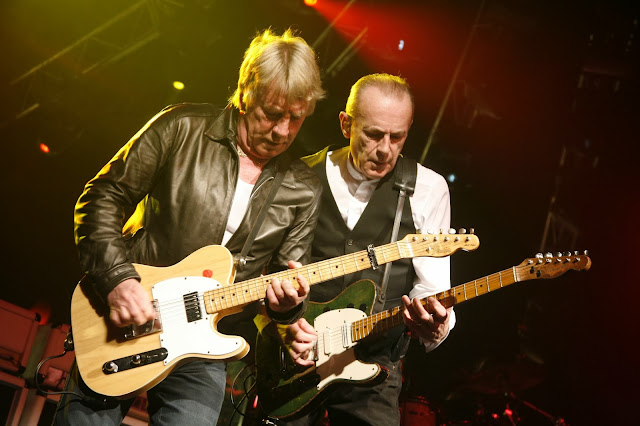 * Status Quo will headline the closing concert of LIME 2014. Picture courtesy of Dave Coulson.
The band that opened Live Aid in 1985 with ‘Rockin’ all Over the World have been unveiled as the headline act at the closing concert at the Llangollen International Musical Eisteddfod next July.

Lead singer and guitarist  Francis Rossi OBE can't wait to perform on the pavilion stage after being told by Jools Holland - one the stars at this year's event - about the magic of the Eisteddfod.

He said: "Jools told me he did the Eisteddfod and what a brilliant place and atmosphere it was. He also explained about the event’s history and that excites me."

Organisers are thrilled the band, that's sold nearly 120 million records and has had 64 Top Ten hits, are joining an already stellar line-up.


Other headline acts include opera superstar Bryn Terfel and the Dutch jazz sensation, Caro Emerald.
The acclaimed bass baritone will be playing the lead in a special production of Stephen Sondheim's Sweeney Todd: The Demon Barber of Fleet Street featuring an all-Welsh cast.
In addition, there will be a world premiere of a new work by top composer Karl Jenkins and an appearance by the chart-topping singing brothers, Richard and Adam Johnson, from Holywell, in Flintshire.
Meanwhile, the Spirit of Unity concert will feature the Cape Town Opera, Africa’s premiere opera company, and the Wales Millennium Centre Only Kidz Aloud Chorus under the baton of celebrity conductor Tim Rhys Evans.
The Eisteddfod office will be closed over the Christmas holidays but tickets for all the concerts can be bought online via the website  www.international-eisteddfod.co.uk

Musical Director Eilir Owen Griffiths was thrilled he'd been able to sign up Status Quo to bring the 2014 event to a "fantastic climax".
He said: "Status Ouo are true rock legends and they are the final piece in the jigsaw for what promises to be one of the best Eisteddfod's ever.
"I am very excited by the galaxy of stars we have lined up - and by the end of the week we are going to be Rockin' All Over the World."
It was a sentiment echoed by the award-winning Village Bakery - recently named as Wales's fastest growing company - who are sponsoring the Status Quo concert.
Managing Director Robin Jones said: "As a locally based family firm, we are proud to have supported the Llangollen International Musical Eisteddfod for a number of years.
"Status Quo have rocked all over the world and now the world will be able to rock with them in Llangollen. It promises to be an absolutely fantastic night."
After performing at more than 6,500 lives shows in front of 25 million people, the Quo frontman Francis Rossi, now 64, can't wait to make his Llangollen Eisteddfod debut after five decades in the business.

Rossi formed The Scorpions, which became The Spectres, with fellow schoolboy Alan Lancaster way back in 1962.

And after a number of line-up changes they became The Status Quo in 1967, although they dropped The becoming simply Status Quo two years later.

By 1967 rhythm guitarist Rick Parfitt, now 65, joined the line-up, just as the band’s first hit, Pictures of Matchstick Men, was climbing the charts, and he forged a close friendship with Rossi which lasts to this day.

This year Leon Cave, at just 35, took over as the band’s permanent drummer, the fourth since John Coghlan put away his sticks in 1981, although Coghlan did appear in early 2013 along with the rest of the band’s original line-up for a one-off mini tour.

In 2009 Rossi and Parfitt were recognised for their services to Music and Charity and were awarded OBE’s in the New Year’s Honours List.

When  Status Quo, take to the Llangollen stage Rossi is determined not to repeat the  mistake he made a few years ago when appearing at Llandudno.

He said: “How could I have been so dumb? We had just returned from a gruelling tour of Japan or Australia and I wasn’t at my best. Now I know, if the name of the town begins with double LL then the chances are, you’re in Wales.

“However, I just forgot where I was for a few seconds and in between songs announced how thrilled we were to be back in England. That was a lesson in how to lose an audience, at least for a while. I’ve never heard booing like it! I didn’t realise how passionate the Welsh are about Wales.

“But I know Llangollen is going to be amazing and I’m determined to enjoy it and make it special. Status Quo might be a lot different to Pavarotti but we are established and I hope, accepted.”

Status Quo have recorded 64 British hit singles – more than any other band – 22 of which have been top 10 hits.

The band made 106 BBC TV Top of the Pop appearances – more than any other band.
In 1988 Quo played a record-breaking series of 14 sell-out shows to more than 300,000 people in Moscow’s Olympic Stadium.

In 1992 Quo performed at the prestigious Last Tattoo in Berlin in the presence of HM The Queen.

In February 2013 the ‘Bula Quo!’ movie premiered at the Berlinale Film Festival in Germany.
Francis Rossi’s preferred guitar is still the 1957 green Fender Telecaster he bought in 1968 for £70.

Over the Christmas holidays tickets for all the concerts can be bought online via the website  www.international-eisteddfod.co.uk

Posted by llanblogger at 9:39 AM