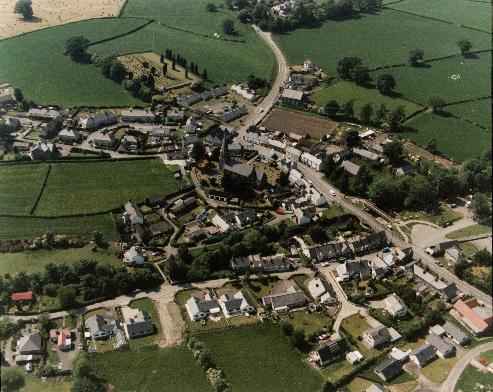 * Llandrillo where the alleged UFO incident took place in 1974.
The release yesterday (Friday) of official Ministry of Defence documents dealing with alleged UFO sightings has thrown fresh light on an a famous incident which took place not too far from Llangollen almost 40 years ago.


The documents, until now subject to government secrecy, have been published on the National Archives website.


The incident, near Llandrillo between Corwen and Bala, took place on the evening of January 23, 1974, and is said by some to be an “extremely compelling UFO event”.


According to UFO writer Billy Booth, it began many of the residents of the village heard an extremely loud noise.


In an account published on the website About.com, he says: “Most of the citizens thought that an explosion had occurred - possibly a plane crash.


“Those who ventured outside on this cold night were astonished to see blue and orange lights near the Cader Bronwen mountain.


“There would be many eyewitness accounts of what was seen. The press immediately investigated the occurrence, and interviewed those close to the scene of the lights on the mountain. The first newspaper accounts made this statement: "There was a huge explosion a few minutes after 8:30 PM. From various accounts, this preceded, some say, by up to two or three minutes, a violent shaking of the ground, like a medium-sized earthquake-objects inside houses were knocked off shelves."

“Local police would arrive at the scene first, soon followed by the Royal Air Force. The area in and around the crash site was zoned off, with no one allowed to enter. A search and rescue effort would be ongoing for several days, with no information being related to interested bystanders or press personnel.


“An employee of a hotel in nearby Bala would come forward with a very interesting story. He stated that a group of men had checked into the hotel, and stayed during the search of the mountains.


“They did admit that they were involved in the mission, but could not talk about what they had seen or found at the site.


“Another account was given by a nurse who lived in Llanderfel, also close to the scene of the crash. Local police had asked for the assistance of the nurse at the crash site. She was told a plane had gone down in the area.


“Being rushed to the scene, and not being able to get a sitter for her teenage daughters, she was forced to take them along. Driving on B4391, at 10:00 PM, the road was deserted. As she reached the foot of the mountain chain, she was shocked at what she saw... a glowing UFO.


“She and her daughters would later relate their story to the press. They saw a UFO, which was almost intact. It was a large, circular object, and glowed an orange color.


“They were within a couple of hundred yards of the object, and were certain of what they saw. They also saw emergency personnel, local police and military, close to the object. The nurse was instructed to immediately leave the area. She told the authorities that she was ordered to the site, but was quickly escorted from the area.


“For several days, all roads leading to the crash area were closed to everyone but authorized personnel. The nurse was told by local shepherds that they were not allowed to tend their flocks during the operation at the mountain.
“Most of the citizens that lived near the area of the mountain crash were convinced by what they saw that a military cover-up was being conducted.


“It is still a mystery as what exactly happened on January 23, 1974 near the Berwyn Mountains of Wales.”
According to a story in the Daily Post on Friday (http://www.dailypost.co.uk/news/north-wales-news/north-wales-ufo-files-really-4694422) the Ministry of Defence UFO files just released include a request from a film and TV company to the ministry to answer claims it was a spacecraft that crashed with the military removing the wreckage and two aliens, who later died, being taken to the Porton Down research centre.


The MoD is said to have turned down the company’s request.


See the MoD files at: http://www.nationalarchives.gov.uk/news/850.htm


See article by Billy Booth at: http://ufos.about.com/od/bestufocrashcases/p/wales1974.htm
Posted by llanblogger at 9:17 AM