Police are calling on the help of the public to trace a 53-year-old man who is missing.
Graham Austin of Shifnal in Shropshire (pictured below) was last seen at around 4.30am on Sunday morning, June 2, when he left a caravan in which he was staying in in the Corwen area. 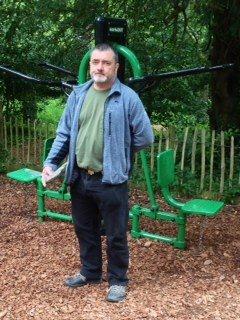 His car was later found at Llyn Brenig, Alwen, near Cerrigydrudion.
The 53-year-old, who was on holiday in the area, is described as white, around 5ft 8’ tall of stocky build. He has short cropped hair which is greying and a full beard.
He is believed to be wearing either jeans or black coloured pyjama bottoms, a pyjama top which has a loony Tunes motif on it and a green coloured Berghaus water proof jacket or fleece.
Mr Austin is also believed to be wearing green coloured shoes which have a brown stripe down the side.
The 53-year-old has not gone missing before and concern is increasing for his safety and whereabouts.
“The Llyn Brenig area is very popular with walkers, cyclists and people who fish, and it is therefore very possible that someone may have seen Graham in the vicinity since the early hours of Sunday morning,” said Sergeant Grahame Brown.
“Concern is naturally mounting for the 53-year-old who has now been missing over 24 hours. I’d urge anyone who has seen Graham or a man matching his description in the area to please contact us immediately on 101.”
Searches have been undertaken in the area involving police, police helicopter, the Search and Rescue Dogs Association (SARDA) and North East Wales Search and Rescue (NEWSAR).
Anyone who has seen Graham or may know of his whereabouts is urged to contact North Wales Police immediately on 101 quoting reference number P085831.
Posted by llanblogger at 10:17 PM