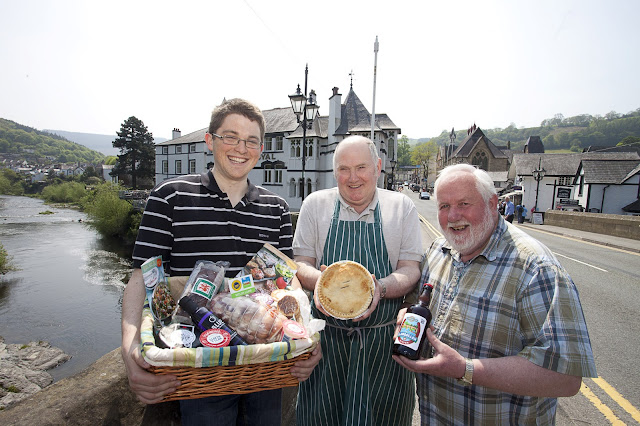 
Hamper Llangollen was named in the Top 10 food festivals in Britain by a national newspaper.
The accolade has delighted the organisers of the popular event that will be celebrating its 16th anniversary when it's held on Saturday and Sunday, October 19 and 20.
More good news came when it was revealed the festival won a special award from Llangollen Town Council for its contribution to the commercial life of the town.
It's estimated the event pumps nearly £400,000 into the local economy every year with £156,000 being spent at the event and a further £234,000 being spent in the town and the surrounding area.
Among the first to applaud the festival was Alun Davies, Minister for Natural Resources and Food.
He said: “I would like to congratulate Llangollen Food Festival in their excellent achievement in The Independent's Top 10 Food Festivals in Britain, as well as gaining a special award from Llangollen Town Council for its contribution to the commercial life of the town.
"Food festivals are an excellent way of showcasing the very best of Welsh produce and, I know from my visit to the Llangollen Food Festival last year, that it is a great example of this."
Colin Loughlin, chair of the local committee that runs the festival was also delighted.
He HehEhsaid: "I am extremely proud that Hamper Llangollen has received this   fantastic recognition of being acknowledged as a top 10 food festival in the whole of the UK.
"We are the only North Wales festival to be honoured by the Independent.
"The  festival has gone from strength to strength since it was taken over by a local committee in 2011.
"The success of Hamper Llangollen is a mark of the quality of the people we have on the committee. Everybody is pulling their weight and the way it has come together is very rewarding.
"I think the magic ingredient in the success of the festival is the location, the town of Llangollen and the people who live here.
"One of our priorities has been to integrate better with the town by involving the school, the Llangollen Silver Band and local choirs.
"We're making a positive contribution the local economy. After last year's event, local traders told us they were delighted with the amount of business we brought to the town. They had a very, very business weekend.
"This year Graham Tinsley, the star of ITV's Taste the Nation and a former captain of the Welsh Culinary Team, will be joined in the show kitchen at the festival by the ever popular Dai Chef.
"They have done a great deal to raise the profile of real, honest to goodness food and their crusade chimes perfectly with our mission to promote the value of our indigenous producers who bring great taste and traceability to the table.
"We have a wonderful array of fantastic food producers clustered in the area and the festival is the perfect shop window for them.
"A food festival is so much better and more interesting than going to the supermarket because here you can sample the food and talk to the producers.
"Hamper Llangollen is celebrating its 16th anniversary this year and is firmly and rightly established as a major highlight in the UK's culinary calendar."
Robert Price, Cadwyn Clwyd's agri-food project officer, said: "In addition to many favourites, we have lots of new food producers wanting to come this year.
"The location of the Pavilion is absolutely  spectacular - I can't imagine that any other food festival in the UK has a more beautiful setting.
"It's also brilliant news for the local economy. If you buy from a local producer, all that money is recycled through the local economy and that sustains employment in our rural areas."
For more information about Hamper Llangollen 2013 go to: www.llangollenfoodfestival.com
Posted by llanblogger at 8:17 AM