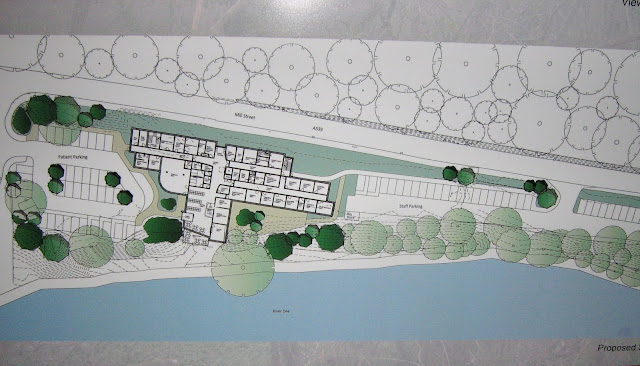 * A plan shows how the proposed new health centre would extend along the River Dee. 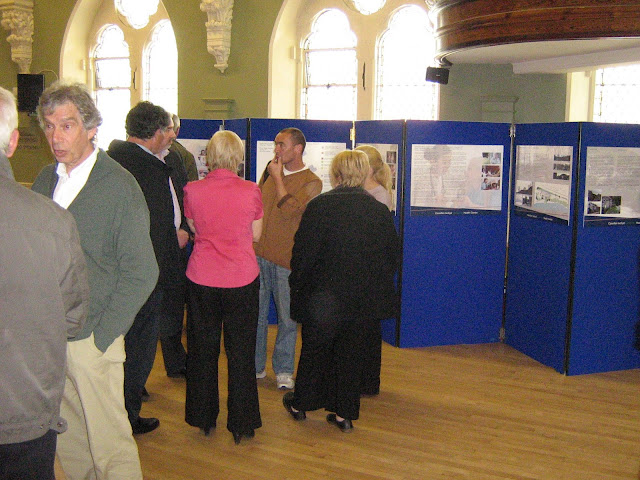 Members of the public discuss details of the health centre plan. 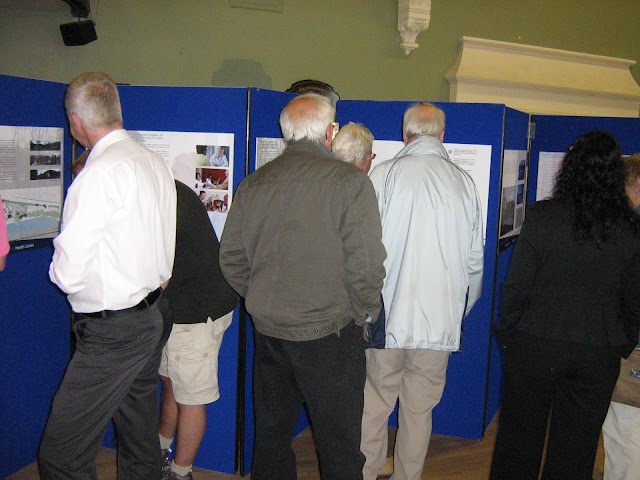 * Interested members of the public gather around the display boards.
A STEADY stream of people turned up at Llangollen Town Hall late on Tuesday afternoon to be briefed on plans for the area’s new health centre.
The Betsi Cadwaladr University Health Board, which controversially axed the town’s cottage hospital earlier this year, recently announced it intends to build a new multi-purpose health facility on land on the A539 currently owned by the Welsh Government and occupied by the derelict former River Lodge hotel.


After unveiling an artist’s impression of the proposed new centre in May, the board took over the Town Hall from 3-6.30pm on Tuesday to provide further details of the scheme ahead of submitting a planning application to Denbighshire County Council.
Members of the public gathered around a series of display panels giving details of various aspects of the plan.
Staff from the health board and Llangollen GP Practice were also hand to answer questions.
Visitors learned that the new centre would be shared between the GPs, the health board, the county council’s social care department and the voluntary sector.
Among the services it would provide are midwifery, outpatients, mental health and social care services.
It was also revealed that discussions were taking place about relocating Rowlands Pharmacy, currently opposite the GP practice in Regent Street, to the new centre.
According to the health board’s proposals, the new centre would be located within the World Heritage Buffer Zone and the Area of Outstanding Natural Beauty.
The site it would occupy extends along the River Dee, bordered on the eastern side by the old railway line and mature woodland and a residential area on the western side.
It is proposed that the GP practice would relocate to the new centre after it is completed in 2015.
The board also proposes that during August and September this year the practice becomes responsible for the local minor injuries service.
Generally, the board says the new centre will become a “focal point for health care in the community” and would also provide extra space in which a range of clinics can be offered.
It would also, said the board, be “designed to blend in with and enhance the historical character” of the local townscape.
Among those at the briefing session was Llangollen county councillor Stuart Davies who said: “It will be a better facility than we had before, albeit without the beds. But it would be wrong to think that particular fight had been lost.”
On the question of ease of access to the proposed centre, he said he understood talks were going on with a local bus company with a view to having one of its services stop there.
Cllr Davies said he was also continuing to explore the possibility of a new bridge being built over the River Dee from the new centre to a point near the playing field on the opposite bank.
Urging people to make use of the minor injuries unit when it was at the GP practice in August and September, he said: “If the health board see it not being used there is a danger they might take it away, so it’s a case of use it or lose it.”
Also at the briefing session was Shaolin Monk Pol Wong whose own plan for his Powys Fadog organisation to open a community centre in the River Lodge was thwarted by its Welsh Government owners.
This drew criticism from the Welsh Audit Office and the Welsh Assembly’s public accounts committee, which accused the government of wasting £1.6 on the affair.
Mr Wong was distributing copies of documentation supporting his case to members of the public.
Posted by llanblogger at 7:16 AM