New Sainsbury's wants to be "part of the town" 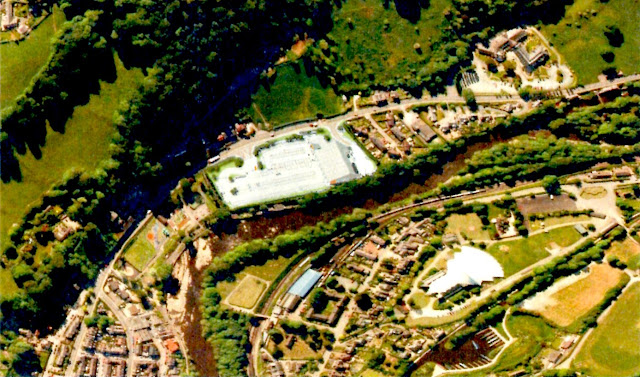 * An impression of how the new Sainsbury's store will look from the air.


LLANGOLLEN’S new Sainsbury store wants to be part of the town when it opens sometime early in 2015
That was the message from one of the supermarket giant’s top managers when she gave an update on the controversial development to members of Llangollen Town Council on Tuesday night.
Jaime Powell, the company’s regional town planning manager, said: “We don’t want to come here and build a store in total isolation. We want to integrate ourselves and be part of the town.”
And referring to fears the new 20,000 square foot store, to be built alongside the River Dee on a site just off the main A5 road, would kill off trade for small shops and cafes in the town, she added:  “I think there will be benefits to both sides if we work together.”
Richard Brown, of the public relations firm JBP, which is working on behalf of developers J B Ross on the scheme and who accompanied Ms Powell at the briefing, began the hour-long session by explaining that the developers would continue to own the site and lease it to Sainsbury’s.
The basis of the whole project, he said, was that the store would be built on land currently occupied by the Dobson & Crowther printworks once the factory was demolished and the operation moves to a new purpose-built factory just across the road on farmland at Cilmedw.


He said it looked likely the new printworks would be ready later next year with work starting on the supermarket in the middle to late summer of 2015.
Mr Brown explained the new store was at “the small end” of the supermarket scale but of the “golden size” to keep customers coming back for their weekly shop
Benefits it would bring to the area, he pointed out, included up to 130 jobs – about 70 per cent part-time – which he described as “high value” ones due to Sainsbury’s comprehensive training scheme.
It would also aim to involve itself in the community by its staff taking part in local fundraising.


Mr Brown said local traders would be invited into the store’s foyer to advertise and sell their products and that Sainsbury’s bosses aimed to work with the town’s chamber of trade.
In answer to a question from Cllr Mike Pugh about where staff would be recruited from, Ms Powell replied that 90 per cent were expected to live within just one or two miles of the store.
Asked by Cllr Sheena Burrell if Sainsbury’s would be going ahead with the inclusion of a café in the store – a move opposed by town centre cafes on the grounds it will hit their trade – Ms Powell said the one proposed would be “pretty small” and not have a massive impact on existing cafes which were aimed more at tourists.
Last year’s mayor, Cllr Jon Haddy, questioned whether the Dobson & Crowther site switch would ever go ahead – meaning the store could not be built.
He also asked the two representatives if they were confident that if the store does open whether it would be sustainable.


Ms Powell answered: “We are confident there is enough trade to sustain it.”
Later, she added: “Our planners think it will be worthwhile. If they didn’t think so we would be opening a smaller convenience store instead.”
Cllr Phil Thane asked if the store could be linked to the town centre through measures to encourage people to walk there from its free car park, possibly along a river pathway.
Mr Brown said this was something which could be looked into.
In answer to further questions, Ms Powell said jobs at the store would be advertised in local papers and signs on the site.


A “recruitment hub” might also be set up at the Town Hall, she added.
Posted by llanblogger at 7:18 AM