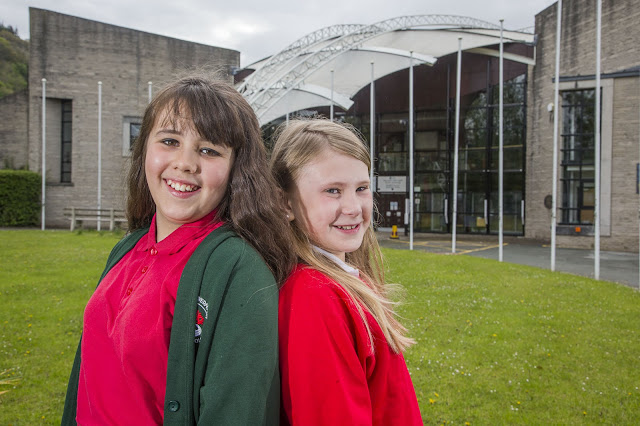 * Milly Orton-Jones, 11, left and Hannah Hughes, 10 at the Eisteddfod Pavilion in Llangollen. The girls are reading out the traditional Peace
Message on the first day of the festival.

Two talented schoolgirls have been given the honour of sending out the traditional Peace Message to the world from this year’s Llangollen International Musical Eisteddfod.
Since 1952, the young people of Llangollen have presented a Message of Peace and Goodwill from the stage of the Eisteddfod at concerts on the opening day.
At this year’s 67th annual Eisteddfod, which runs from July 9-14, two versions of the Message, one in the Welsh language and the other in English, will be movingly read out at separate concert performances in the Llangollen Pavilion on Children’s Day, Tuesday, July 9.
Both orations, at 10.30am and 12.30pm, will have audiences of around 2,000 primary school youngsters from across north Wales, and be accompanied by specially composed background music from the National Orchestra of Wales.
The poignant Message, part of which tells how “peace radiates like rays of sunshine touching people’s hearts”, has been specially written for the occasion by two year six pupils from Llangollen’s primary schools.
They are 11-year-old Millie Orton Jones from Ysgol Gwernant, who will read out the Message in the Welsh language, while the English translation will be proclaimed by 10-year-old Hannah Hughes from Ysgol Bryn Collen.
Mike Law, who is co-ordinator for outside stages at the Eisteddfod, said: “The original idea for this year’s Peace Message came after Llangollen Rotary Club held its own local version of a national Rotary competition, called Young Writer, which invited local children to pen a letter on the theme of peace.
“Millie and Hannah were the competition winners and it was agreed that their two separate entries – in Welsh and English – should be used in some way during the Peace Message concerts at the 2013 Eisteddfod.
“As the two pieces did not fit easily into the Peace Message format, the two girls were asked to write a second piece, specifically about Llangollen, the Eisteddfod and the theme of peace.
“The two pupils will read out their work live on stage as part of the Peace Message concerts.
“The National Orchestra of Wales will play specially chosen accompaniments as a background."
Millie Orton Jones, who will read out the Welsh language version, said: “I am looking forward very much to the concert and reading out the Peace Message which says how much the Eisteddfod means to the people of Llangollen.
“I have been a member of the Young ‘Uns, the local junior theatre group, for a few years and I am used to doing things in front of an audience so I don’t think I will be too nervous.
“I’m not worried about speaking the message in Welsh because I go to a Welsh medium school and am quite fluent in the language.”
Millie’s mum, Tessa Orton Jones, said: “We are very proud of her for being chosen for this honour and she is very excited about appearing in the concert.
“Llangollen Pavilion is a big stage but I don’t think Millie is too nervous about reading out the Peace Message as she is a seasoned performer with local stage group.”
Hannah Hughes, who will read the Peace Message in English, said: “I am very proud to have been chosen to read out the Peace Message.
“I have been in plays before at my school but never done anything in front of so many people as will be in the pavilion that day.
“I’m a little bit nervous I might get some of the words wrong but I’m sure we will be doing plenty of rehearsals before the concert to make sure we know the message as well as possible.”
Hannah’s mum, Jane Hughes, said: “We are really proud of her because this is a fantastic achievement.
“It is a once in a lifetime opportunity for a girl who lives in Llangollen to put herself and her school at the front of the Peace Message.”
Mike added: “Later in the Peace Message concert, pupils from Ysgol Morgan Llwyd in Wrexham will work in song and music from prompts in the writing, plus there will be a new poem written specially for the occasion by Aled Lewis Evans.”
He added: “The two girls will be guests of the Eisteddfod and will be introduced to senior officials, including our President Terry Waites, and well-known visitors.
“They will be performing before an audience of approximately 2,000 children at each concert, and the centre-piece of the Peace Message is a musical story about space exploration played by the National Orchestra of Wales.
“Using work by young children carries on the old tradition of broadcasting Welsh language children’s messages to the world which goes back to the early 1920s.”
Mr Law explained this was the first time this particular format for the Peace Message concert had been used and said: “The whole concept is exciting and different and the opportunity it provides for these two young girls to perform before an audience of 2,000 is exceptional.”
Posted by llanblogger at 8:14 AM