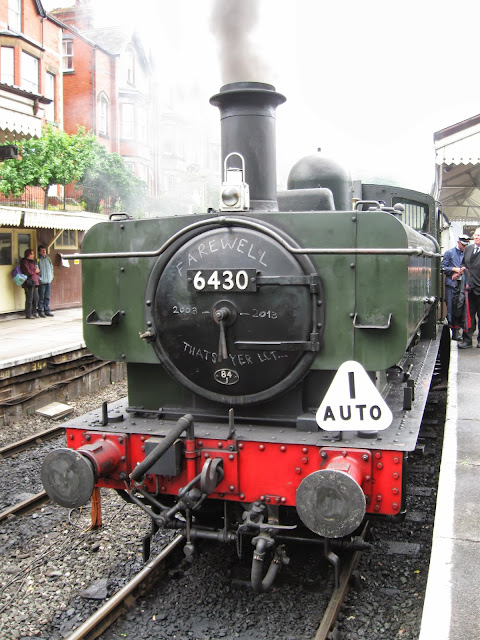 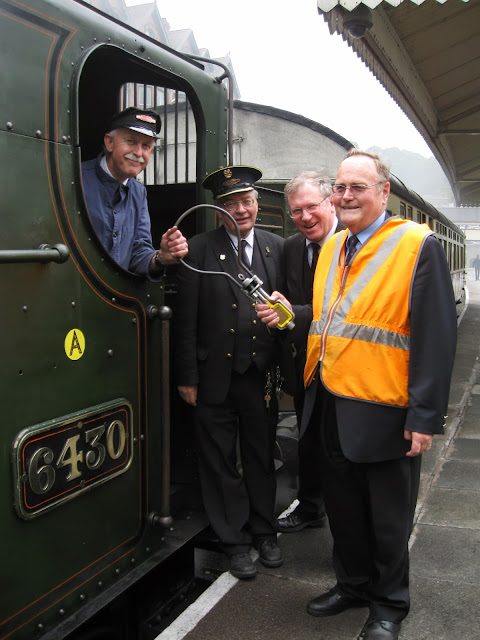 * Members of the train crew as they prepare for the final
departure. From left are driver Ben Jackson, guard
Wayne Ronneback, ticket inspector Martyn Amys and signalman Paul Reynolds.

Llangollen Railway's annual Railcar Gala saw one the regular steam engines based there operating its final passenger trains on Sunday.

No.6430 has now completed 10 years in service since restoration to working order after being rescued from the scrapyard.

The popular Great Western Pannier Tank engine is now withdrawn for a major overhaul after its boiler certificate expired.
On its last day in service it ran with the Great Western Auto coach owned by the group based in Oswestry as the steam train option on a day when other train services on the Dee Valley line were provided by the heritage diesel railcars.
George Jones for Llangollen Railway said: " No.6430 is a brave little engine having been restored at Llangollen from a very basic kit of parts after it had survived a visit to a scrapyard when originally withdrawn by British Railways.
"It is the only mainline engine to have escaped from a scrapyard other than the famous one at Barry Island, South Wales from which many steam locomotives were rescued.
"After it has donated various parts to keep an other Pannier tank in service, a lot of the missing parts were made at Llangollen to allow the engine to be restored to working order by 2003. Since then it has achieved fame as part of the two-coach Great Western branch line auto-train.
"It has been a worthy ambassador for the Llangollen Railway during its visits other heritage railways in Britain during its ten years in service. We hope that a fast track overhaul of the boiler and mechanical parts will allow for an early return to service.
"Operating on this final occasion the steam train made an historic contrast with the heritage railcars and, in particular, the two visiting single unit Bubble cars. These attracted a lot of attention and interest from rail fans keen to sample a ride on these two unusual visitors to the line."
Posted by llanblogger at 8:16 AM