Anger over plans to take X94 bus away from Parade Street 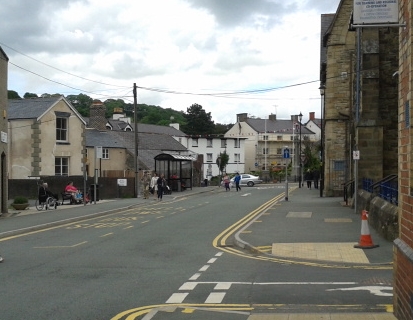 * Parade Street where the X94 will no longer calling from later this year.


A Llangollen county councillor has blasted plans by Arriva to stop using the Parade Street bus terminal for one of its local services.
Stuart Davies has been officially informed that the company is changing the route of the X94 bus to leave out Parade Street from when its new timetable begins on August 18.
And in an angry response, he said: “They are ceasing to use the Parade Street terminal which was created a few years ago, turning a quiet leafy street into a yellow, barren, pole-strewn urban catastrophe.
“People will remember the furore generated when, overnight, the trees in Parade Street were slaughtered to make way for the bus terminal.
“Thousands of pounds were spent turning this part of the town in to a one way system to pander to these companies and now they are saying that they are cutting services and ceasing to use this monstrosity of a system.
“What a waste of money and vandalism it was.”


A spokesperson for Arriva Buses Wales said: “It is true that we are changing the route of the X94 to omit Parade  Street later in the year.
“We have taken this decision, together with a number of changes along the X94 route, in order to improve the punctuality of the service.
“At this particular location, buses are often delayed when attempting to make the right turn from Parade Street Street on to Castle Street.
“The parking bays on Castle Street effectively turn it into one lane street for vehicles as large as a bus, and when, as is often the case, delivery wagons or other vehicles block the street, it has a detrimental effect on our timetable.
“We know from recent correspondence from our customers, local council and Bus Users UK, that punctuality and reliability of a service are a priority for our customers, and we need to take reasonable steps to ensure that the routes we use  allow us to run to timetable.
“In order to improve punctuality and maintain the existing route, we would need to put more resource in to operating the service.  This service is operated on a commercial basis with no public subsidy in this area and we are not in the position provide the additional resource required. However, we would be willing to work with the local authority if they were able to offer support in maintaining the current route.”

Cllr Davies responded: "This is an example of arrogant companies riding roughshod over local concerns."
He has asked Denbighshire County Council officials to make formal representations to Arriva about the bypassing of Parade Street.
He believes that under new timetable arrangements the X94 will stop in Mill Street, and the Arriva spokesperson confirmed this by saying: “I have been told that the X94 will stop at the bus stop near the bridge."
Posted by llanblogger at 8:14 AM